There is something threatening about public incivility. It is a modest, but distinct, form of terrorism. God fearing, good hearted citizens are made to fear for the security of person, family and home. Tolerating incivility gives power to thugs who are often marginal in their abilities, accomplishments, and social value. It is manifestly wrong that those who give so little to the common good should be allowed to extract so much from it.

Now scroll over to The Onion, and read about the dilemma a sheriff faces.

The string of unsolved crimes includes the defacement of public property, an incident of breaking-and-entering, and a string of harassing phone calls. The latest crime—the sudden disappearance of two yield signs from Hoxie Street—occurred Monday.

"We believe the yield signs were removed in order to disrupt traffic patterns, most likely to cause an accident," [Sheriff] Steinhorst said. "The party responsible for the crime could be anyone from suspected terrorist Ahmad Ibrahim Al-Mughassil, who is on the FBI's most-wanted list, to that Fairman kid and his buddies. It could be the work of one or the other. Possibly both, though I have to say I doubt that."

Anthropology and Economics, however, is interested in more serious fare: what is the balance between civility and creativity, or put another way, is there an optimal level of transgressiveness?

The perspective at Cold Spring Shops is that there is still room to err on the side of civility, and we offer some observations from Rebecca Hagelin, who is giving props to Kathleen Santorum's book, Everyday Graces.

Children learn them when parents take the time to teach them and to enforce the rules. Absentee parenting, part-time parenting, parenting that says, "Go to your room, watch television, get on the computer, amuse yourself becauseI have neither the time nor the inclination to make you do otherwise," produces part-time results.

We also offer for your consideration some Lileks commentary on the back-to-school adverts. 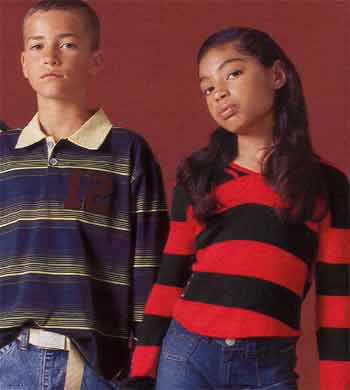 God forbid our children should ever be happy. Not when they can have ATTITUDE, which is what we all really want from our kids.

Methinks Anthropology and Economics frets too much.

We have a lot of transgressiveness to marginalize before I will fear the tramp of brownshirts in the streets.

RUNNING EXTRA: The Moderate Voice has found more marketing of "attitude," and James Lileks has it about right:

Britney a stepmom? Let me answer that question for you: no. “How Hollywood’s blended families work” is not an issue that keeps me up at night; I expect that they stumble along thanks to money and docile Salvadoran nannies who do all the heavy lifting, and sometimes find themselves crying because they know they will be out of the child’s life eventually, and if they tried to show up for the wedding 18 years from now they’d be turned away by big men in black suits. Plus, look at that guy. These are our celebs. Not exactly a Hurrell portrait of Cary Grant, eh? He knocked up one women, produced the little girl you see here, and now he’s sauntering off to bed another doxy. Men like this make me ill.

In the comments to the Anthropology and Economics post is a link to some background information on the individuals inducing the British lifestyle policing. These individuals, in the best academic tradition, are being transgressive without realising it.

Posted by Stephen Karlson at 13:24