LIFE EXPIRED. This is not a great picture. It's backlit, it's a going shot, and the platform roof gets in the way. But there is a message in it anyway. 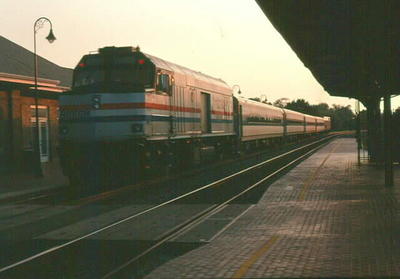 Princeton, Illinois, 15 July 2005.
At the rear of this train is what the British would call a "driving van trailer" and what we call a "cabbage" car (because it provides a cab for the train crew and space for checked baggage.) Its number is 90218. It began its service to Amtrak as one of the first head-end power equipped F40PH diesels, No. 218, designed to work with the new Amfleet coaches. The first of these diesels, including No. 218, went into service in 1976, about when the first Space Shuttles were being erected in California. Unlike the Space Shuttle, No. 218 was taken out of service in the middle 1990s, its engine and generator removed to make space for baggage.
Posted by Stephen Karlson at 00:41