CORRIDORS: NOT JUST FOR THE NORTHEAST ANY MORE. A late-running Empire Builder makes up time as a late-running Hiawatha gets under way from Sturtevant, Wisconsin. 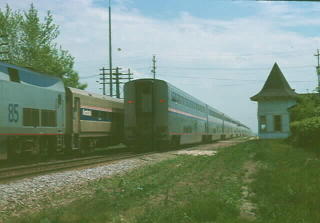 The picture motivates some thoughts about whether or not Amtrak is a pork-barrel project. The context is a Shape of Days post offering a Texan perspective on Amtrak's usefulness.

I live in Dallas. If I wanted to go to San Antonio, I could get in my car and drive. It’s about a six-hour trip, depending on weather and other factors. Or I could go to the airport and buy a ticket on Southwest Airlines. Flights depart from Dallas to San Antonio every hour during the day and more frequently during rush hour. The flight takes an hour and the ticket costs $100 if I buy it at the gate.

Or I could take the train. There’s one train from Dallas to San Antonio per day; it departs at 1:40 p.m. from Union Station downtown. The price is right, at a mere $26.

But the trip takes more than ten hours.

The train departs Dallas at 1:40 p.m. and arrives in San Antonio at 11:45 p.m. with stops in Fort Worth, Cleburne, McGregor, Temple, Taylor, Austin and San Marcos. I dare you to find McGregor, Texas, on a map. I dare you.(*)

And if you want to go from Dallas to Houston … tough. It’s apparently impossible.

But are the difficulties of finding a train in Texas evidence of an Amtrak failure, or evidence of a failure elsewhere in transportation policy? Shape of Days argues the former.

Point is, if you live in Boston and want to go to the District, rail travel is a viable option. But if you live anywhere else, forget it. It’s a total non-starter.

I think the Hiawatha passengers would disagree. Mitchell Field to the north suburbs of Chicago in less than an hour is pretty good. One can sometimes spend an hour getting from the north suburbs to the state line on the Tollway. Chicago to Springfield or Kalamazoo or Ann Arbor is pleasant enough. Did I mention California? We'd get an omnibus post out of it.

What about Texas? New Orleans - Houston - San Antonio and Dallas - Fort Worth - Bryan - Houston - Galveston have potential as corridors, as does Dallas - Austin - San Antonio. The distances are not that much greater than Vienna - Paris or Bern - Hamburg. Some of the intermediate cities are larger than their European counterparts, and the topography is suitable for fast running. And at one time (September of 1954 to be the Official Guide I consulted) there was a comprehensive passenger train service, with both the Texas and Pacific and the Cotton Belt offering a day train and a night train New Orleans - Houston - San Antonio and the Burlington - Rock Island and the Santa Fe offering a day train and a night train Dallas - Houston. The Texas and Pacific had several trains on the Dallas - Fort Worth - San Antonio line. None of these were set up as corridors in the modern fashion. But perhaps the problem was in committing resources to the interstate highways. Or perhaps the Interstate Commerce Commission encouraging the railroads to offer competing service on the same schedules, rather than complementary service throughout the day. And, good though those interstates might be, they're under a bit of stress with the evacuation of Galveston and Houston. Texas Rainmaker is live-blogging his experiences in the traffic jam. Government failure, or providing the wrong incentives to travelers? (And that's leaving aside the Texas Highway Patrol's decision to block some of the back roads and divert drivers to the interstates. On the one hand a stranded motorist on a back road might be overtaken by the hurricane, on the other a clogged interstate might become a deathtrap if this storm speeds up.)

Perhaps some passenger trains would have helped in this emergency. The objective conditions for a corridor service under normal circumstances might also be present, Amtrak or no.

(*)McGregor is the station stop for Waco. The Cotton Belt crosses the Santa Fe there. The Amtrak route leaves the Santa Fe for the Katy at Temple. Bonus for correctly identifying the current operating companies.

Posted by Stephen Karlson at 23:01