A RAILWAY PRESERVATION REPORT. It's been rather busy with the day job, which turns into a night job as well. Here, however, are some pictures from a local preservation railway that does its biggest business on fall weekends. (One end of the line is behind a farmers' market that does a great business with hayrides, pumpkins, apple pies and other Dairy State harvest goodies. Lots of kids see the train and talk the folks into going for a ride.)

First up, a real camera shot of the recently restored Sheboygan Light, Railway, and Power Car 26. This car served for many years as a lakefront cottage before its owners donated it to the museum to put it back on rails. 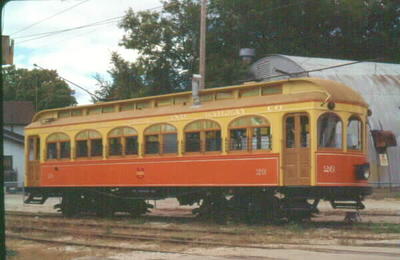 Inside, the seating is tidy if not particularly luxurious. These cars existed to bring workers to the Kohler factory and farmers to the department stores. On weekends they hauled picnickers to Elkhart Lake (long before the Forumula 1 set discovered the place.) 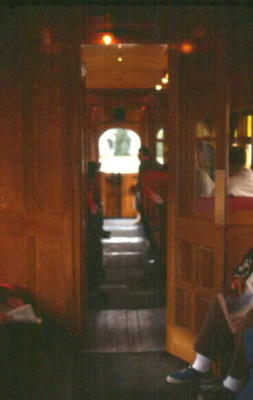 Philadelphians might cringe at this picture. Sorry. If one has to modify a car to load from street level and run off a trolley wire, one might as well be honest about it. This is former Philadelphia and Western and Philadelphia Suburban car 164. Philadelphia Suburban purchased the Electroliners to offer coffee shop and tavern-lounge service on the Norristown High Speed Line. 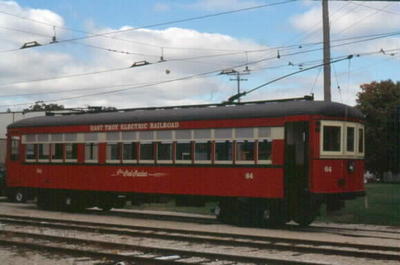 Here is a picture from October, 2004. The locomotive is one of the newer pieces in the collection. It was built in 1935 and served to shift coal hoppers for Wisconsin Electric Power at Port Washington, Wisconsin until about 1970. It does on occasion move revenue freight for the preservation railway, which does serve some on-line industries. 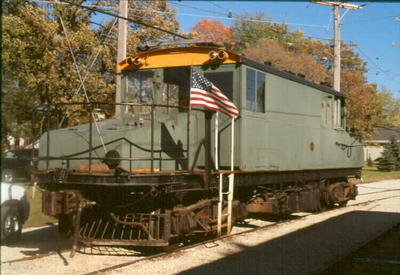 Inside the museum ticket office and gift shop is this O Scale layout built by the late Tom Matola, an accomplished modeler of streetcars and interurbans. The model is of a Milwaukee 500-series deck-roof streetcar, one of the heavier cars to break up the streets of Milwaukee. If only some trader would make castings for Milwaukee's unique harp-case streetlights. (Visitors to the contemporary city take note: the ones that have proliferated in shopping and tourist districts of late are replicas. The originals mostly disappeared in a fit of misguided modernization during the 1960s and 1970s.) 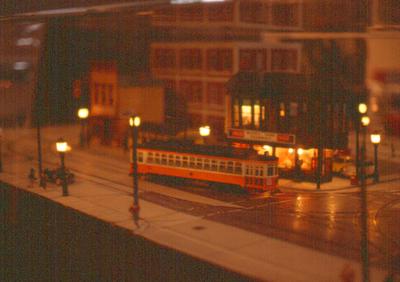 Posted by Stephen Karlson at 22:22