SOME MODEL BUILDING PROGRESS. This is the chassis for the Locomotive Workshop Alco-General Electric-Ingersoll Rand 300 hp boxcab diesel kit. I've been chasing most of the short circuits and other glitches, and it is beginning to run reliably well on straight track with the right additional weight added to the frame. (You'd think a thick slab of brass like that frame would be plenty of weight, but this is O scale, and I am working on some additional power pickups. At present two drivers on each truck are the entire power supply for it.) Some purists might bridle at the idea of each truck powered by a vertical can motor, but one does what one can with what one has. 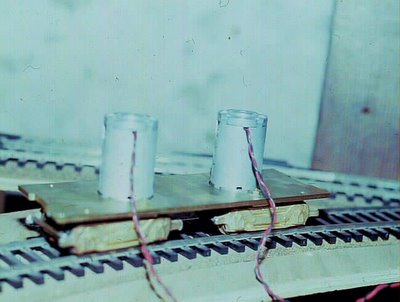 The prototype looks like this, although mine will be somewhat less colorful. Ingersoll-Rand prettied this one up for the Nation's Bicentennial, and I think to draw attention to what they were part of. (As built they were generally engine black. I think Chicago and North Western painted one yellow and green later.) 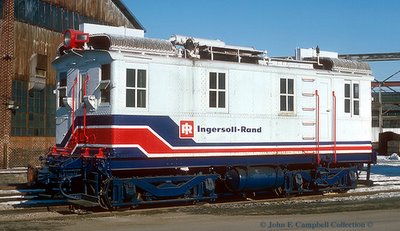 Look closely at those radiator assemblies at each end of the roof. I have two brass bars and four brass half-rounds drilled with lots of holes, and lots of two lengths of pre-bent brass rod to go into those holes. I'm wondering if there's some way to apply a little bit of solder paste to each length, insert all the little rods into all the little holes, get the whole works in some kind of a jig, then hit it with the blow-torch and it's all done at once! Otherwise it's the soldering paste and the resistance soldering unit one rod at a time. Sounds tedious. On the other hand, there will soon be a stack of qualifying exams to grade. (I get paid to do that.)
Posted by Stephen Karlson at 21:14