THE GENESIS OF THE GENSET. The first of Max Essl's patents for a diesel locomotive with modular power units is No. 2,249,628, granted July 15, 1941. The narrative to the patent asserts an improvement in the prior art in being able to quickly remove and replace a small power unit for repair at a workbench, rather than have the locomotive out of service while one large prime mover is being repaired or replaced. 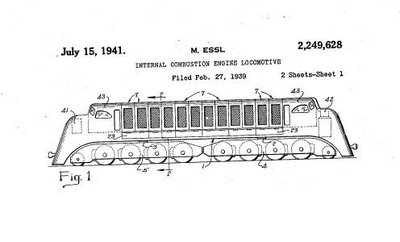 The elements of the genset are in this figure. 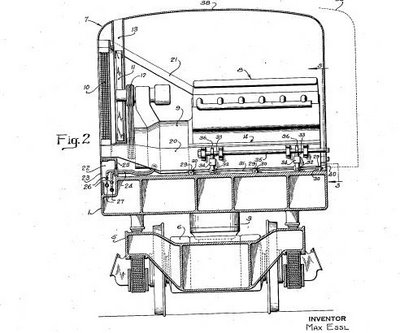 Subsequent patents No. 2,299,420 describe improvements in the modules to permit some servicing to be done by a maintainer while the locomotive is in use (Mr Essl would probably not appreciate me joking about the real Centipedes requiring an "oiler" and a "wiper" in the nautical mode), and No. 2,317,849 is recognizably a Centipede, with further improvements in cooling systems, ventilation, and balance.
Posted by Stephen Karlson at 20:37