GRANGE HALL. In the Corn Belt, that would be the location of potluck suppers and populist politics. In England, it's one of several locomotive conversion projects currently under way. The Great Western Railway had a penchant for assembling several different types of locomotives from fairly standard parts. With the right source of components, it's possible for preservationists to create a believable reproduction of a class of locomotive that had gone for scrap. One such project involves a boiler from a Hall and the running gear of a Prairie Tank to recreate a 6800 series "Grange" engine.

An English friend came west for the O Scale show in Chicago and he brought this picture of a project at the Didcot Railway Centre. 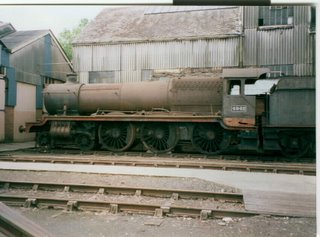 The locomotive is still recognizable as a "Hall" mixed-traffic locomotive with six foot driving wheels. But the first "Hall" was a re-fitting of a "Saint" passenger locomotive with 6'8" drivers. It makes sense, then, to take a Hall, of which there are sufficiently many that the movie makers can paint one of them red and run it out of Kings Cross Under, and re-re-fit it as the Saint project.

There is also work afoot to create a "County" class out of assorted parts as County of Glamorgan in honor of the scrap merchant whose staff cut up easier-to-scrap rolling stock, allowing numerous steam locomotives to be rescued for preservation or to serve as parts bins for the various replica projects.

And with that project comes an incentive ... roll my 1027 County of Milwaukee onto the ready track before the full-size 1014 County of Glamorgan is in steam.
Posted by Stephen Karlson at 20:45