A LITTLE AHEAD OF ITS TIME? You're looking at a Baldwin Centipede, generally viewed as an evolutionary dead end from the early days of the diesel era, when "diesel-electric" involved more emulation of electric locomotive technology than current best practice does. 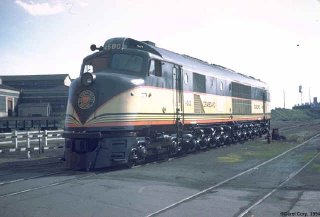 The production Centipedes mounted two turbocharged inline-eight 1500 hp diesels for a freight engine the equivalent of a cab and booster set from Electro-Motive or Alco, or a passenger engine with 1.5 times the power of those builders' standard passenger unit. Had it been a reliable locomotive (those early turbochargers and big cylinders posed lots of engineering problems, and Baldwin's pipefitters never figured out that joints in lubricating lines ought be kept at a distance from the wiring harness) it would have allowed economies in dieselizing many passenger trains that were a bit much for a 2000 horsepower diesel but overpowered at 4000. (Yes, fantasize about one of these babies storming through Sturtevant at 110 with nine on the Afternoon Hiawatha.)

But the Centipede was an attempt by Baldwin to salvage some of their investment in an even more ambitious project, to pack 6000 hp into a single diesel carbody. The plan envisioned mounting eight 750 hp modules comprising a normally aspirated V-8 turning a small generator, with the electrical cabinet and radiators mounted on the same skid with the engine and generator. These modules were to be installed crosswise, instead of the usual longitudinal axis configuration on single- or double-engine diesel-electrics. A Swiss-born engineer, Max Essl, developed the modular concept for Baldwin.

I think in contemporary usage we'd call such a module a "genset" (referring to the engine-generator-electronics on its own skid.) And Union Pacific has purchased some 1400 hp switchers powered by twin Cummins gensets from National Railway Equipment Company, with some 2100 hp triple-genset ... Union Pacific calls 'em yard engines, but they look like ... road switchers on order.

The advantage of the small gensets is that with modern control systems, the engines can be fired up or powered down as required, reducing the emissions compared to the standard single-engine driving one alternator. Mr Essl didn't have that technology at his disposal.

And then the irony ... Union Pacific was negotiating with Baldwin for a large order of Centipedes, until word of the units' troubles on Pennsylvania filtered back to Omaha. Union Pacific instead replaced its big steam with gas-turbine electric units that were fine as long as exhaust and noise emissions weren't problems. But perhaps the last laugh will be Baldwin's, if the genset technology can be scaled up to an eight-pack of 750 horses, although the package would probably look more like one of these. 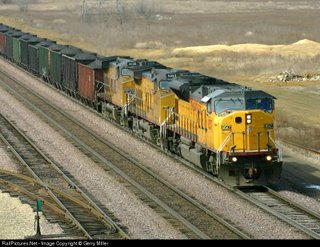