NEVER SMILE AT A CROCODILE. The most recent Monday Train Blogging, which author DoDo notes will be offered intermittently in the future, focuses on crocodilian Alpine electric locomotives. Any electric locomotive with a center cab and long machine housings at each end suggests the eyes and snout of a crocodile, or in the United States, an alligator.

The crews of the North Shore Line referred to this motor, purchased secondhand from the Oregon Electric, as "the alligator."

The original Swiss crocodiles illustrate several steps in the evolution of electric locomotives. The latest issue of BackTrack includes an article by R.A.S. Hennessey on "A Century of Electric Classification." (BackTrack's publisher charmingly continues to operate without benefit of a web site, let alone online content.) It focuses on the varying ways the engineers would design locomotives as well as classify them. The main design problem is housing the machinery. As Mr Hennessey puts it, there are two "main faces of electric traction morphology," which in North American parlance are "'steeple cabs,' with the driving cab centred between two bonnets;" and "'box cabs,' with a cab at both ends." The crocodile is clearly of the order "steeple cab." (The body has a passing resemblance to the roof line of a North American school house or church with a belfry.)

The variants of crocodile in DoDo's post illustrate a somewhat more challenging proposition, classifying the machinery. The canonical Swiss Ce6/8 has a guide axle at each end and two pairs of three driving wheels connected by siderods and driven by a jackshaft. That imitation of steam locomotive technology poses a somewhat simpler counterbalancing problem than a steam locomotive with both reciprocating and rotating masses. In When the Steam Railroads Electrified, William D. Middleton explains that early electric motors of sufficient power could not be made sufficiently small to fit under the frames. A larger motor above the frames also raised the locomotive's center of gravity, which improved its tracking ability. There were some very large applications of the jackshaft principle in use by the Virginian and Norfolk and Western in the Appalachian coal fields, as well as the Pennsylvania Railroad's DD-1 (the classification is simple enough: a 4-4-0 steamer is a Class D; if you couple two of them back-to-back you have a D-D, even if the engineers will call it a 2-B+B-2) that made Penn Station possible. One example is in preservation at Strasburg, Pennsylvania. 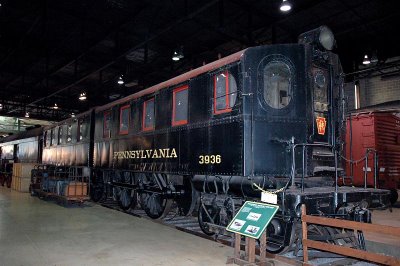 The locomotive is of the order "box cab."

Another design variant in the early years involved putting the armature of the traction motor directly on the axle, the famous "gearless bi-polar" design. Imagine your basic science fair motor with one field and a two-pole armature, but the armature must be free to rotate relative to the axis of the field. (The whole axle must rotate at a constant speed going around curves. Railroad wheels are smaller at their outside diameter than they are at the flange. The axle tilts on curves, with the smaller outside diameter turning as fast on the inside rail as the larger diameter at the flange is turning on the outside rail. There will be a quiz later.)

Despite the technical shortcomings, the bi-polar motor was used successfully by the New York Central's S-motor, which the National Museum of Transport notes, "was the prototype for thousands of Lionel and Ives model electric trains" (including models currently available.)

The picture shows the motor at St. Louis. Another is in the Illinois Railway Museum collection.

The other application of the bi-polar concept served the Coast Division of the Milwaukee Road, a mountainous stretch with few opportunities for fast running. The locomotives also provided inspiration for Lionel, Ives, and American Flyer, although with a bit more artistic license in the rendition.

One bi-polar is in preservation, also at St. Louis. The BackTrack article uses it as an illustration of variations in wheel arrangement descriptions. I shall simply use 1B+D+D+B1, in the North American fashion, with each grouping of wheels pivoting independently. Lionel and the other electric train makers of the 1920s often scaled their "Bi-Polars" down to two powered axles so the engine would go around the Christmas tree. Most were painted orange or black. The real ones finished their careers painted Milwaukee's Union Pacific-inspired yellow with red trim.

North American railroads also discovered what DoDo noted about the safety margin those machinery hoods provided. The Pennsylvania Railroad modified their P5a motors from box cabs to what we call "streamlined steeple-cab" design after a fatal grade crossing accident. The modified version has crocodilian features.

Support the Fallen Flags site.
The better-known GG-1 was designed from the beginning as a streamlined steeple cab type. A few remain in preservation, including one at the Illinois Railway Museum that has been repainted into proper Pennsylvania pinstripes and given its proper number 4927 back. 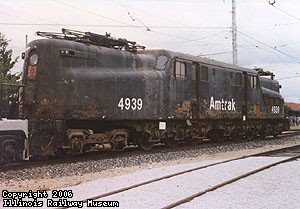 But is it correct to refer to any steeple-cab locomotive as a "crocodile?" In the United States, the steeple cab design dates to the earliest days of electric railroading, with a plant switcher built for the Ponemah Mills of Taftville, Connecticut, in preservation near New Haven. 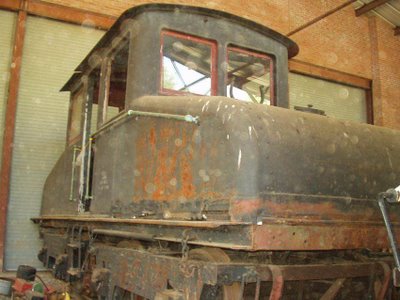 On shed at East Troy, Wisconsin.

But are all steeple-cabs crocodilians? The Bernina crocodile, although it looks like East Troy's L-8,

also a snowplow motor, the Bernina crocodile clearly has equipment hoods that pivot independently of the cab.

If the standard for crocodilian electric locomotive includes snouts that pivot independently of the cab (adding to the reptilian nature of the beast,) there is a North American candidate, the Illinois Terminal Class D freight motor.

This picture, from Dave Mewhinney, illustrates the articulation perfectly.

(Cross-posted at European Tribune)
Posted by Stephen Karlson at 17:01