RESPECT THE BOX. A soon-to-be released (to journeyman economists like me; the Recognized Pundits rate advance copies) book titled The Box : How the Shipping Container Made the World Smaller and the World Economy Bigger draws a great deal of attention.

I read a review in The Economist.

WHEN the MSC Pamela sailed into Felixstowe, Britain's biggest container terminal, on her maiden voyage last year, Hutchison Whampoa, the port's Hong Kong owners, took a deep breath and renewed their efforts to build more deep-water berths. They were looking to the future. At 1,053 feet (321 metres), and able to carry the equivalent of more than 9,000 containers, Pamela is the world's largest container ship. But not for long: leviathans with twice that capacity are on their way.

The point of all the media tributes is the ostensible 50th anniversary of the international shipping container, which offers two advantages, reduced handling and reduced pilferage, over traditional transloading methods.

Consider the economics. Loading loose cargo, a back-breaking, laborious business, onto a medium-sized ship cost $5.83 a ton in 1956. McLean calculated that loading the Ideal-X cost less than $0.16 a ton. All of a sudden, the cost of shipping products to another destination was no longer prohibitively expensive.

This opened up all sorts of possibilities. Instead of manufacturing goods locally, a company could afford to replace its overcrowded multi-storey factory in Brooklyn with one in Pennsylvania, where taxes, electricity and other costs were lower, and then ship its goods to New York in a container. Later the factory might move to Mexico; it is now probably in China.

An article I recall contrasted traditional shipping with containerization by using the example of a cask of olives. At each transload, a few got crushed and a few got eaten. Normal costs of business and all that. Virginia Postrel's farewell column at the New York Times (her new print medium port will be The Atlantic) notes the change.

Just as the computer revolutionized the flow of information, the shipping container revolutionized the flow of goods. As generic as the 1's and 0's of computer code, a container can hold just about anything, from coffee beans to cellphone components. By sharply cutting costs and enhancing reliability, container-based shipping enormously increased the volume of international trade and made complex supply chains possible.

She links to a Spiegel article that observes the half-century with musings about the latest generation of ships to round the Horn.

Vessels that accommodate 6,000 to 7,000 standard containers -- or TEUs ("twenty-foot equivalent unit") as they are known in the industry -- are becoming a common sight on the high seas. And designers have already dreamed up huge freighters capable of accommodating 13,000 TEUs.

According to one rule of thumb, a single medium- sized ship can move as many containers as are transported on a typical German autobahn during a whole day. When goods are shipped in such vast quantities, the transport costs become negligible.

These ships are too big for the Panama and Suez canals, let alone the St. Lawrence Seaway. What happens when they hit land? Back to The Economist, with more on the challenges facing port authorities (the government agencies that own the port facilities and have the responsibility for providing the infrastructure that companies in Dubai and elsewhere manage.)

As to the future, the author looks to ships that will approach the “Malacca-Max”, the maximum size of a vessel passing through the Strait of Malacca, the shipping lane between Malaysia and Indonesia. Some container ships are already too big to get through the locks in the Panama Canal. The future giants will be a quarter of a mile long, 190-feet wide with their bottoms 65-feet below the waterline. They will be able to carry enough containers to fill a line of trucks 68 miles long. Hutchison needs to get digging.

A quick calculation: 13,000 TEUs = 6,500 40 footers = 3,250 standard well cars = 26 standard stack trains. It's more manageable that way. But The Superintendent's favorite expert on Pacific port operations notes that there is currently no direct rail access to quayside at Los Angeles or Long Beach: anything headed east is rubbered to the railhead. And when those 26 extra stack trains converge on Greater Chicago (which includes the Union Pacific yard at Rochelle -- there are a lot of short cuts of well cars, bare-table moves, and light engine movements through DeKalb now) they're adding to growing congestion on the rails. 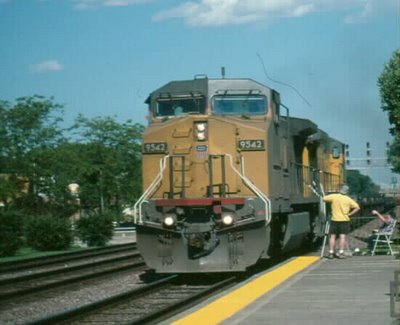 Elmhurst, Illinois, 16 June 2002.
The train-spotters are awaiting the arrival of a steam locomotive, No. 3985, which, as is often the case with special events, arrived just as a rain shower ruined the exposures. The train is a bare-table move (empty well cars) reflecting the loads east, empties west (it's sometimes cheaper to sell the container to a scrap metal merchant than to find a westbound load for it) traffic the articles reference. In Chicago,

After 90 years, the railroads finally have run out of excess capacity. That in turn has restored their ability to raise rates, according to James Valentine, a research analyst for Wall Street giant Morgan Stanley.

"These positive trends in pricing and better returns are likely to continue for years, maybe decades," Valentine said.Because "all roads lead to Chicago," he added, the region will get a generous slice. "It should receive a disproportionate benefit from the railroads' resurgence."

Union Pacific's western competitor, BNSF, expects a near-quadrupling of container traffic from 2004 to 2007.

Memo to university administrators: growing demand is often evidence of greater willingness to pay. Railroads are finally in a position to earn the opportunity cost of capital (reported profits in previous years often fell short of that opportunity cost; any distribution to the stockholders is effectively liquidating the company.) But getting there hasn't been half the fun.

Major freight lines once numbering in the dozens combined into the mere half-dozen left today. Employment plunged from 458,000 when Congress approved [the] Staggers [deregulation act] to 165,000 as of 2005.

That difficult period left scars, including strained relations with workers and ultracautious management.

And, despite "productivity" measures that may be the rail equivalent of scan-tron sheets and on-line instruction, crew exhaustion is still a potential hazard sufficient to bring additional rulemaking. And some consumers are discontented.

Some coal and chemical shippers, feeling burned as the railroads flex their newfound power to raise freight rates, have started complaining to Congress. It's a struggle that has flared on and off for more than 150 years, and it could flare anew as these old companies continue shifting into a higher gear.

Ah, yes, all those common and joint cost problems again. (Higher education suffers a similar problem. Is it the well-to-do legacies or the merit scholars or the athletes that are the most price-sensitive traffic?)

Posted by Stephen Karlson at 22:42