TRAINS THAT GO AROUND IN CIRCLES. The press coverage I received (some time ago, nothing ever happens fast in the academy) as the local roller coaster expert earned me an invitation to go on a field trip, to be available as a resource person in case anyone was curious about the history of the rides or the economics of amusement park pricing. 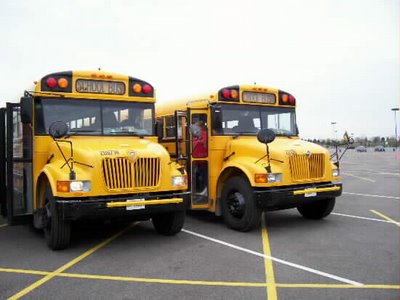 A school bus on an Illinois tollway, even a recently maintained tollway, is not conducive to doing much talking in any event, although many of the passengers were able to nap both ways. 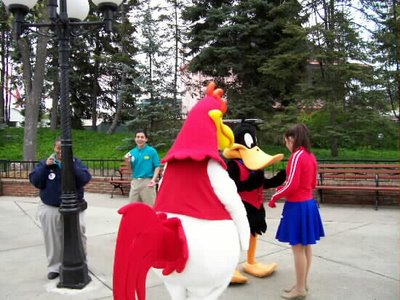 The Six Flags enterprise, which has a partnership with Warner Brothers, is celebrating its 45th year (that refers to the Texas location; the Gurnee park opened in 1976 and became a Six Flags property in the 1980s)

But we came here for the roller coasters. A number of the Community Advisors (that's Northern-speak for what I understood as "housefellows") asked if I'd like to tag along. Their objective was to ride all the roller coasters that were running.

First up is this combination of a Wild Mouse with a Tilt-A-Whirl. 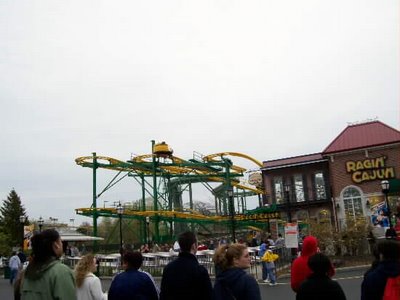 On the lower level of U-turns, the machinery unlocks the coaster car, allowing it to pivot while the wheels below follow the tracks. No two rides alike.

On to more traditional fare. 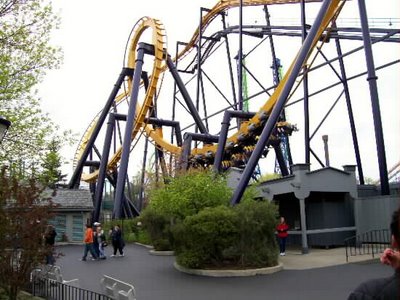 Batman has received a new paint job (it used to be All Black) and it isn't as rough as it was a few years ago. 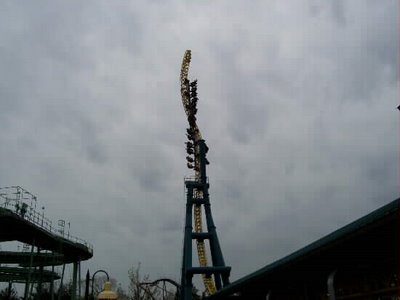 The shuttle-loop technology has morphed into these. The power source for this roller coaster is a linear induction motor. It still takes two runs through the field to achieve sufficient vertical velocity to reach this position.

The clouds look threatening, but the rain held off until later in the day. It's raw and windy this evening.

Six Flags makes a great deal of use of "rage" theming, perhaps not the best idea given that it is alongside a tollway full of Illinois drivers.

The tallest coaster is Raging Bull, with plenty of photo opportunities in the infield. 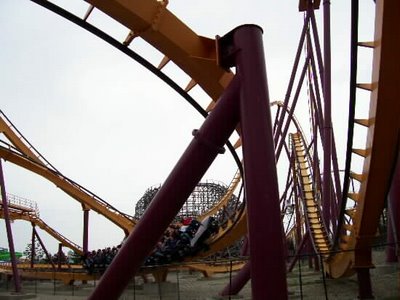 In the background is Viper, a twister inspired by the Coney Island Cyclone as well as my favorite at the park.

A legend remains in use. 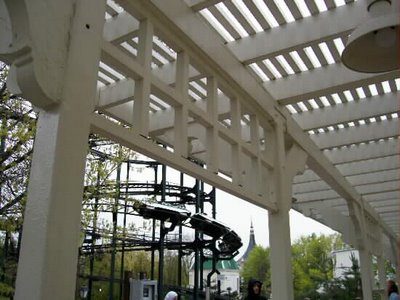 The Whizzer, known as Willard's Whizzer in Marriott days, was supposed to be removed for a new attraction, but popular protest prevailed. The coaster is one of the few remaining Lionel-principle Schwarzkopf coasters with the electrified lift hill. (A few of the old-style scenic railways had third rail power at a number of points along the ride. Whizzer gets all its punch off one lift to the highest point.)

I'm not sure what this character is supposed to be. 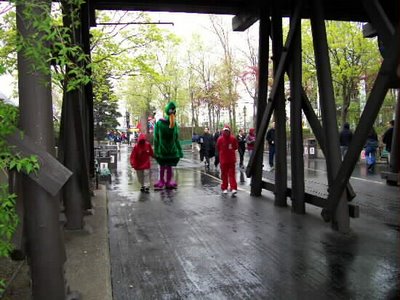 Note the street railway tracks in the middleground. Like many a real city, Six Flags abandoned streetcar (well, horsecar) service but is a bit slow in removing or paving over the tracks. At one time, the tracks were used for an evening parade using battery-powered floats evocative of the Schuster's Christmas Parade.

We're a little out of sequence here, but that's because Superman was not functioning properly on our arrival.

It's running well later in the day. 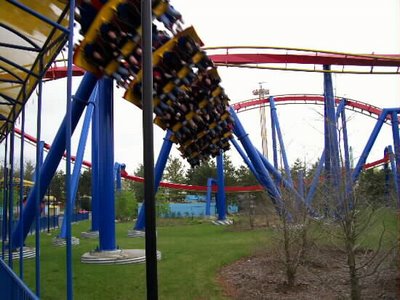 Six Flags is a permissible Liberty Destination for recruits from Great Lakes. There is no North Shore Line shuttle from the Main Gate to the amusement park. 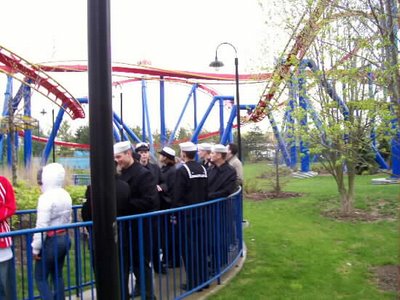 The circuit complete, my hosts were ready for some eats and some rest. Thanks!

And yes, if you see a picture of a roller coaster, you may conclude that the camera, which fits an inside jacket pocket, and its owner, did ride that roller coaster.

Posted by Stephen Karlson at 21:50