After the excitement of the Pacific Shoreliner and Southwest Chief adventures, I had to calibrate the experience properly. An inspection of the Hiawatha line was in order. 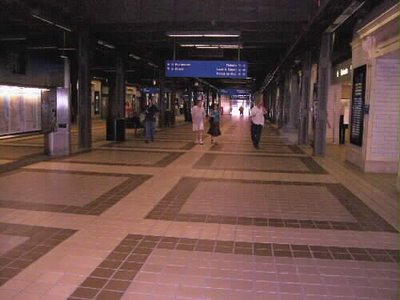 By midmorning, the dashing commuters are pretty much at their destinations, and unobstructed photography is possible. This concourse has been simplified and automated under Metra. At one time there were concessions here, and the train indicators were high-tech for the Harriman era, with a clock face up top and brass hands that could be set to show the departure time, and the destinations were on wooden slats. (I suspect the railroad maintained a full stack of slats for each train, rather than requiring the gate attendant to separate the Winnetka and Wilmette from Wheaton and West Chicago each time a train left. I have no idea how many slats might have gone home as unauthorized souvenirs.)

Consider this post a onetime resident's view of tourist Milwaukee. Not far from the station is a small park that was un-named for a long time and then it was called Marquette Park. It's since been renamed Zeidler Union Square. 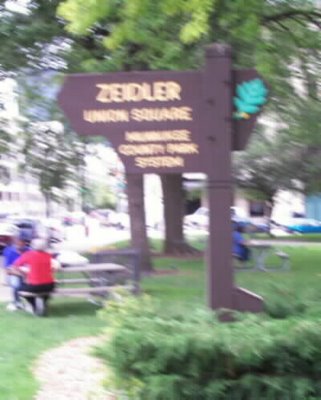 In addition to the trees and benches, there is a decorative chain with numerous slogans, some from the history of union organizing, some purely pragmatic. 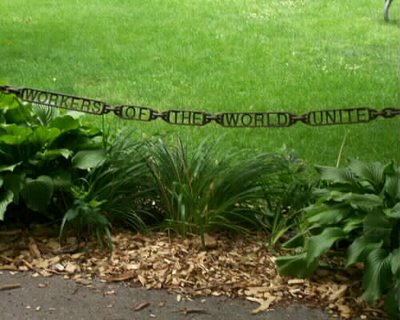 Two women were having an animated conversation in a Slavic language, quite possibly Russian. They may have learned this motto as "Proletarii vsekh stran, soedinyaytes'"

The park used to be the Transportation Common of Milwaukee, with interurban stations to the east and west and the Milwaukee Road's gateway to the racetrack on the south. Preservationists have listed the Public Service Building as what came before WE Energies used it as general offices. 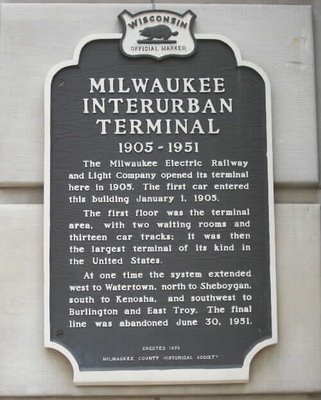 The Third Street frontage has been rebuilt with replicas of the doors that once enclosed the departure side of the interurban station. 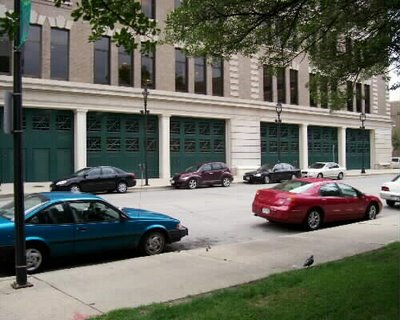 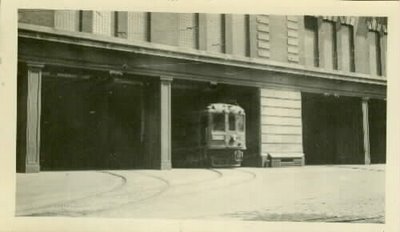 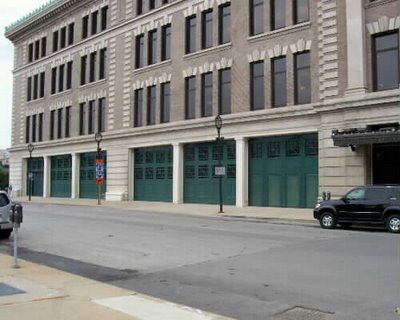 The same backdating has been applied to the arrival side on Second Street. (Milwaukee Electric's cars were set up with a motorman's cab at the front end only.)

You may have learned to read with a little help from Gertie the Duck. 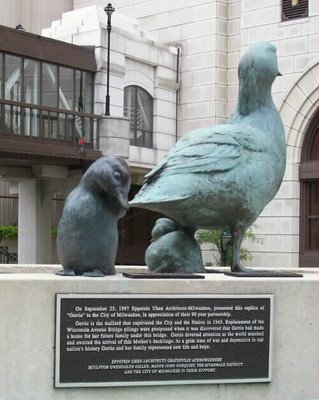 The Iron Block is also a listed building. The hot dog cart is rather popular with office workers. 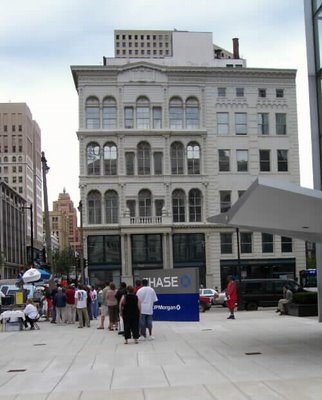 Milwaukee Street may not offer as much in the way of outdoor dining as San Diego, but the storefronts are spruced up. 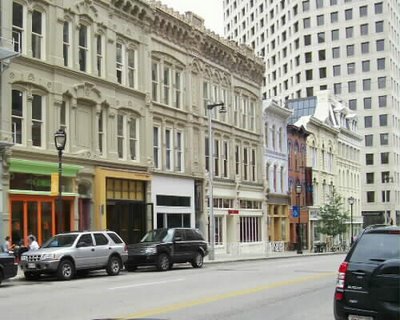 City Hall is getting a new roof. 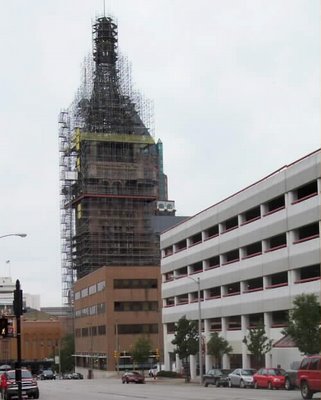 Along the riverfront, the Oneida Street power plant is now a theater. The Milwaukee Electric Railway and Light Company demonstrated the use of pulverized coal as boiler fuel at this powerhouse. The Wells Street streetcars passed their powerhouse here. 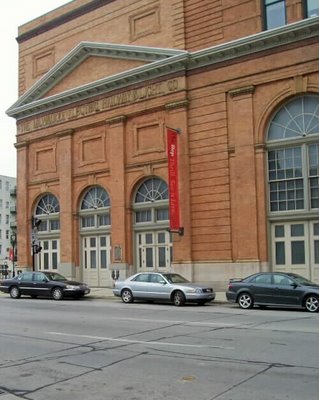 Across the river, the Germania Building shows off its Prussian theming. 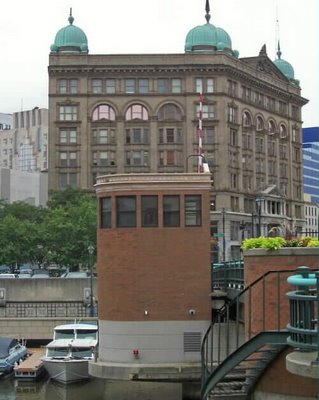 Marquette Park is now along the riverfront, at approximately the landing of the Marquette-Joliet Expedition in the Milwaukee area. The park commission has invested heavily in harp-case streetlights. 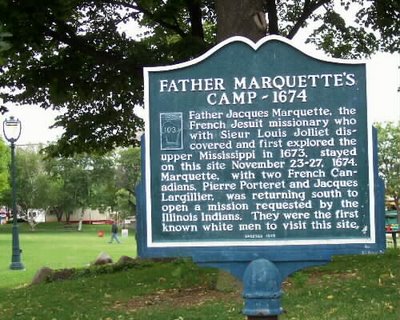 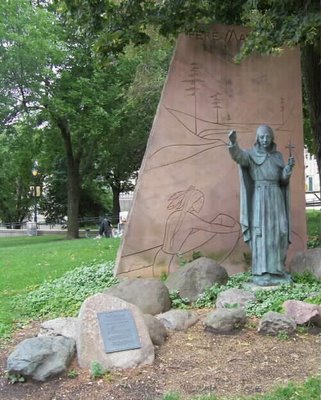 A Holstein cow ruminates over historic Third Street. (No, the tanners haven't figured out how to use these for saddle shoes.) 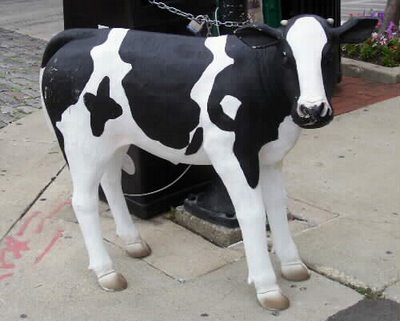 To the north, developers are reusing the Commerce Street power station and the Schlitz Brewery. 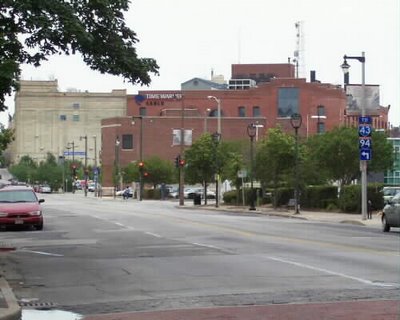 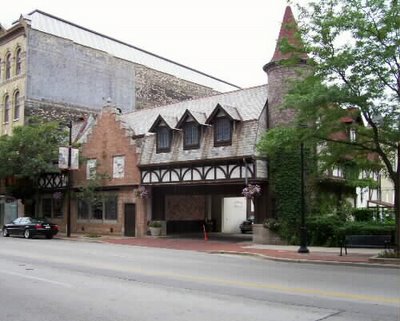 This alleyway entry has been prettied up. 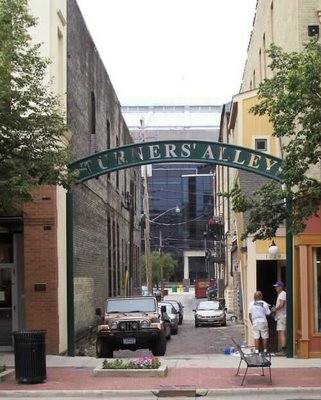 The problem with living in a city is that one sometimes gets into a routine and misses some of the events that are suggested for tourists, including the fish fry at the Turn-Bezirk. 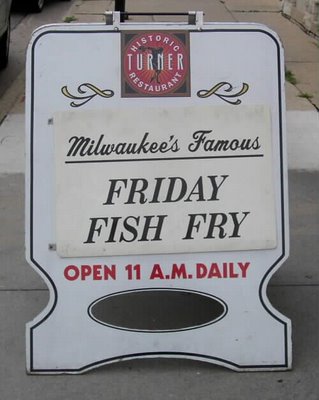 The Turner Hall is also a listed building. The kitchen and bar are open. The club still has classes in floor exercises. 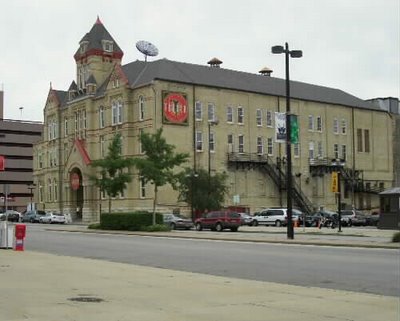 Fred Usinger's store still looks much like it did years ago. 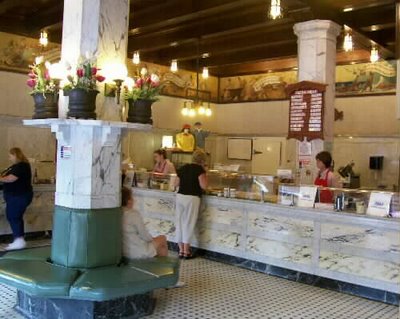 These elves were painted 100 years ago. 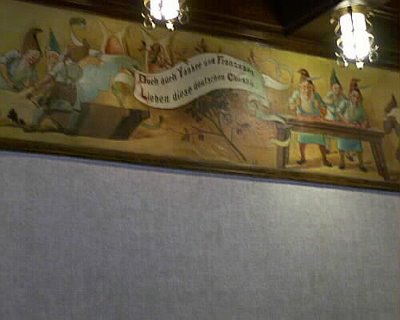 A few packages of frankfurters are enroute home with me. Milwaukee's station, which is being renovated, is rather busy with Hiawatha passengers, people meeting passengers off a late-running eastbound Empire Builder, and passengers arriving well ahead of time for the westbound Builder. There's a healthy contingent of Mackinac sailors riding the train. 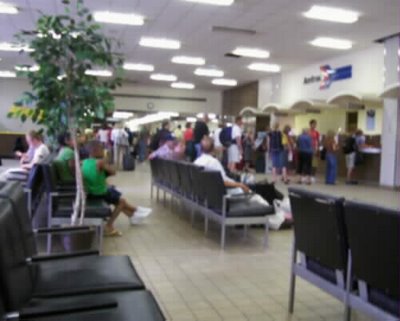 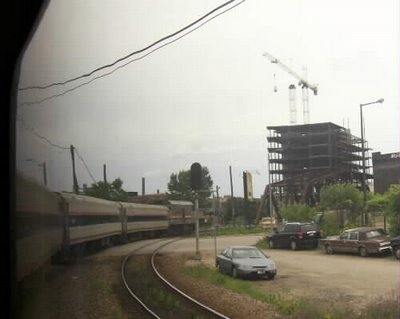 The foundry that blocked the view of Allen-Bradley is gone. 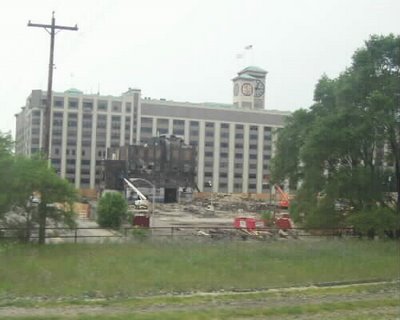 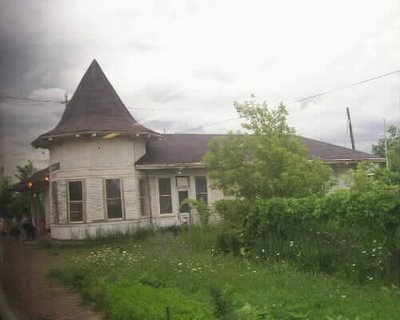 Sturtevant for Racine looks close to ready to open. Rain moves in from Pleasant Prairie to Rondout. Despite the weather, the train is running well. Glenview 4:01:24 - 4:02:15, pass Mayfair 4:09:50, Pacific Junction 4:13:33, Western Avenue 4:18:20. This run might well have been as fast as any I have timed had the dispatcher not held our train outside Union Station to allow the commuter trains to leave on time. Arrive Union Station 4:27:45.

During the evening rush, Metra runs some limited-stop trains, including one that calls only at Wheaton, Winfield, Geneva, and Elburn. (Has Metra considered assigning one of the beverage cars to this train? These stops are the more affluent quarters along the line.)

The two Chicago and North Western coaling towers at the California Avenue engine house are in the way of other projects. One of them has just been removed. 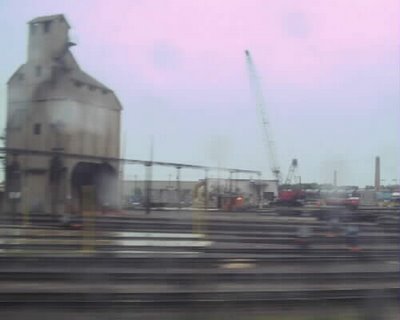 Near LaFox, the Elburn 400 meets a Union Pacific freight. 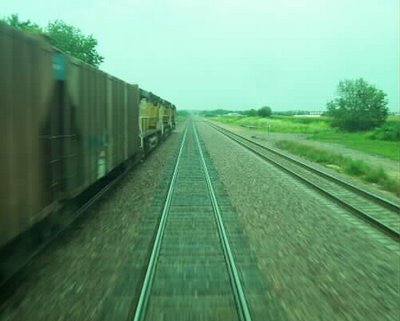 And so homeward bound, with the frankfurters headed for the 'fridge.
Posted by Stephen Karlson at 15:00