THE LIGHTER SIDE OF A CONFERENCE. The recently concluded Western Economic Association conference in San Diego used the Manchester Grand Hyatt as headquarters hotel. The hotel is in the middle of a convention center district that not too long ago was an area of light industry and the docking area for the fishing boats. The view from my hotel room is of a transit corridor and tourist area. The conference shared the Hyatt with Bernina University, which served sewing machine sales representatives and technicians as well as a goodly number of -- I hesitate to say hobbyists, but the attendees didn't appear to be taking in tailoring for the rent money. There was also a large Irish dance gathering of some kind at the convention center. Perhaps the eight-to-ten set had occasion to propagate variations on "I don't wanna be a chicken, I don't wanna be a duck" during breaks.

Some convention-goers might have been bothered by the crossing bells ringing for all the trolleys, and the horns on a few freight trains that rolled through here. All in a night's sleep in DeKalb. 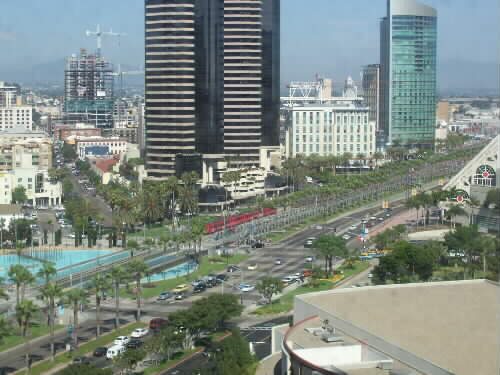 I pushed the zoom on the digital camera to get this view of the trolley's combined Cold Spring Shops and Kinnickinnic Station. The baseball field is in the middle distance. 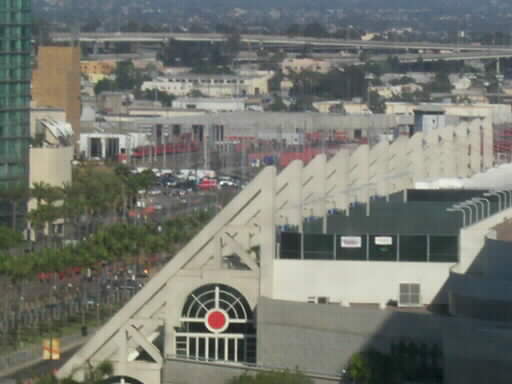 Swing the camera the other way; there's a view of the channel to the Navy Yard and the Coronado brige. The marina has replaced the fishing port. A few fishing boats are docked closer to downtown. 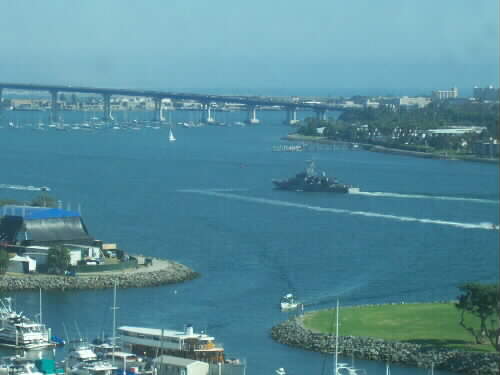 The conference offered a dinner cruise as an extra-fare option. We stayed in the inner harbor, where U.S.S. Midway, CV-41, is now a museum. More about the carrier in a forthcoming book review. 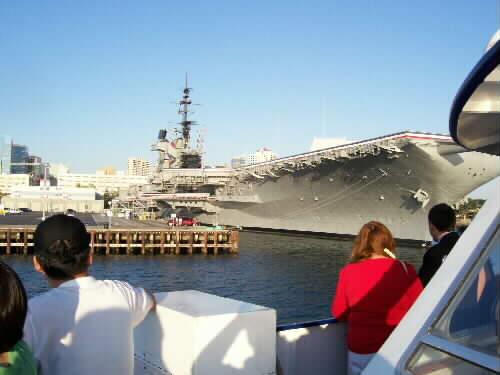 The Maritime Museum of San Diego is at a nearby pier. Star of India, an early iron-hulled ship, is the most notable ship in the collection. 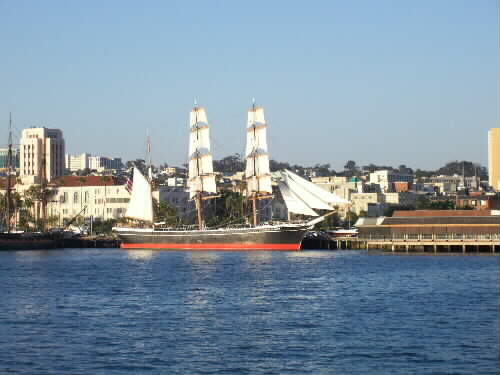 H.M.S. Rose, a re-creation of a British frigate, (see the Rose page for an illustration of Tower Bridge doing what it was designed to do) is probably the most frequently viewed ship in the collection in her role as H.M.S. Surprise. (In my research, I discovered this frigate simulator. May check it out.) 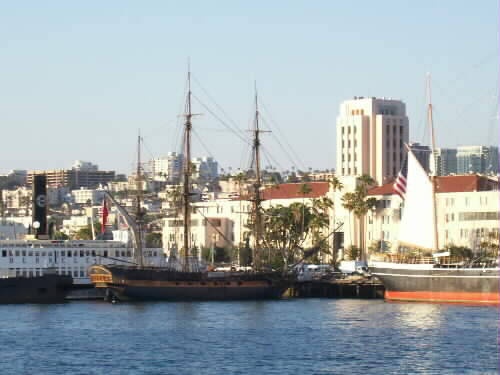 On the other side of the pier is Californian, a replica of a revenue cutter. We'll see her in action later. Between the tall ships is Berkeley, a Southern Pacific passenger ferry rendered obsolete by the Golden Gate Bridge. 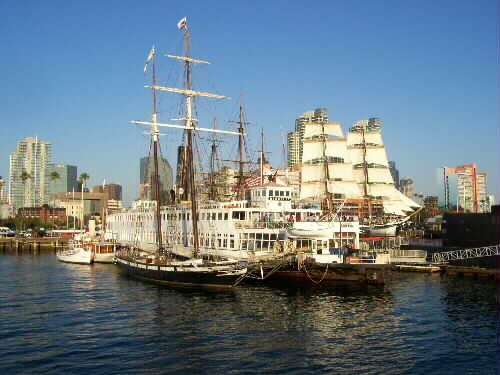 The conference also offered a baseball game, which I passed on, but strolled over that way for a leisurely dinner. The Giants provided the opposition, and the parking lots and streets are filling up in anticipation of the first pitch. 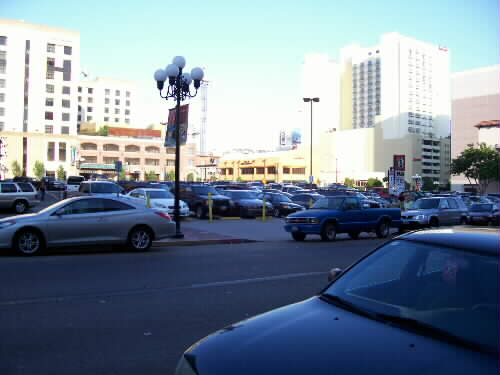 City stadiums with an entertainment district nearby have much to recommend them. The ambience around the new stadium (I forget the name of the corporation that has the naming rights for this one) is not quite that of Wrigley Field, but there's a lot more life than I recall around Tiger Stadium, and Miller Park might as well be in Portage for eateries and watering holes nearby.) This picture is from the front porch of a taqueria in a somewhat more populated area than Antioch. 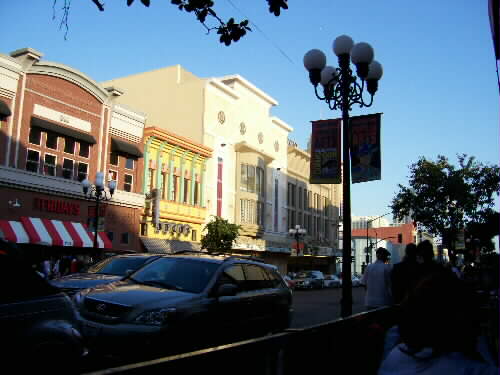 I had to remind myself that I was in San Diego on business. A relatively new replica of America is now homeported at San Diego, with some cooperation from Manchester Resorts. 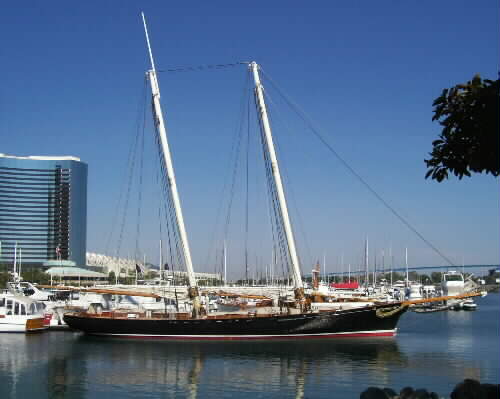 Wisconsin Dells has its Ducks. San Diego has a Seal that operates on the same principle. It's built on a Ford truck chassis with an inboard-outboard motor astern. The pilothouse has more than a passing resemblance to a seal, and there are seals and sea lions sunning themselves on the buoys. 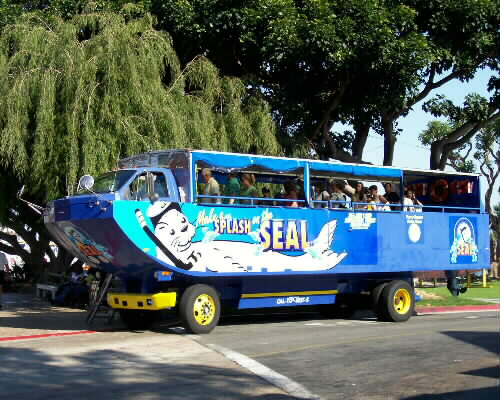 On one particularly busy day, the wind was blowing rather smartly. I resisted the temptation to blow off the conference and hire a sailboat to see how close to the wind I could go or coax a screaming reach out of her. This one would suit. 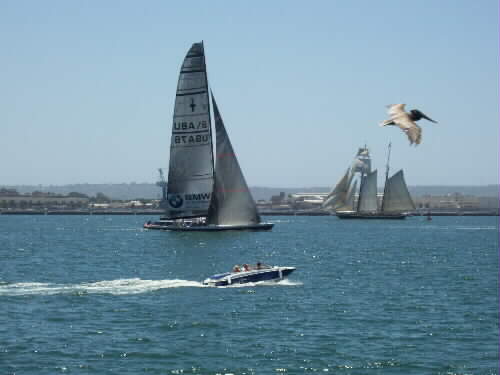 Stars and Stripes 76, from the 2005 defense debacle, was offering 2 1/2 hour cruises all weekend. The timing of those cruises conflicted with commitments I had made at the conference. Californian is also carrying passengers. "A marvelous bird is the pelican. Its beak can hold more ..."

But this is the way things were. 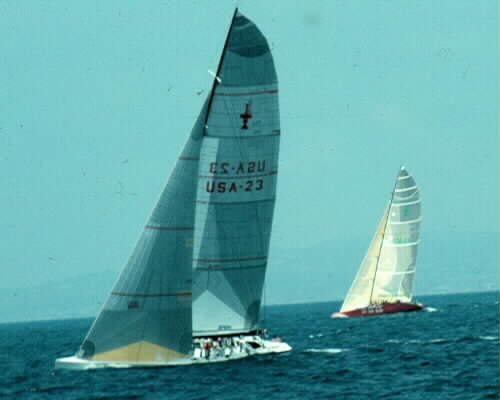 Race 5, May 16, 1992.
San Diego is still a Navy town, yuppie encroachments notwithstanding. This monument to the carriers stands near the entry to Midway. Note that the two training carriers IX-64 Wolverine and IX-64 Sable are mentioned on this monument. (In researching this post I just discovered a weblog devoted to the Great Lakes training carriers that mentions a museum not far from the Glen of North Glenview Metra Station. The weblog also recalls a naval aviator named George H. W. Bush who learned how to land on Sable.) 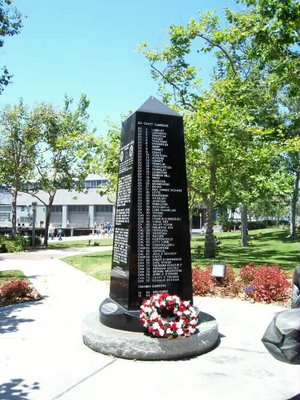 A U.S. Navy Memorial homecoming statue is to the south. This one was dedicated August 13, 1998. 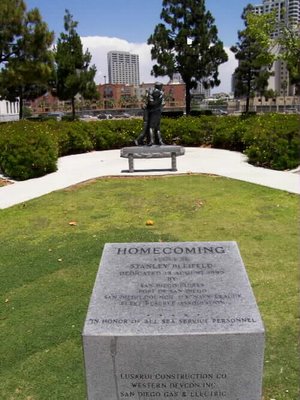 This naval activity is not far from the San Diego railroad station, which is in the middle of yet another makeover. It is now home to the Coaster commuter trains, and a trolley stop. 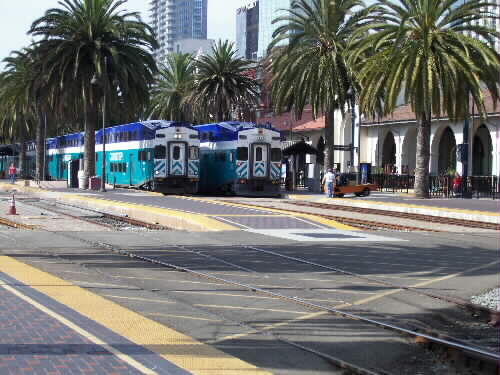 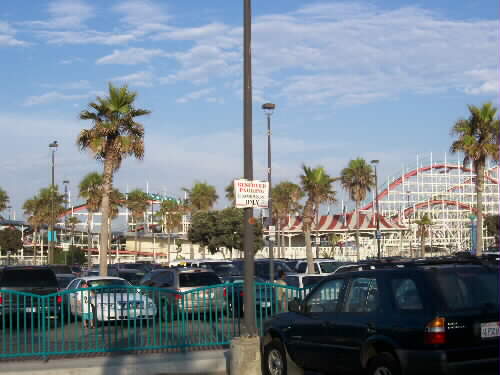 This yellow submarine was offering a more sedate ride. 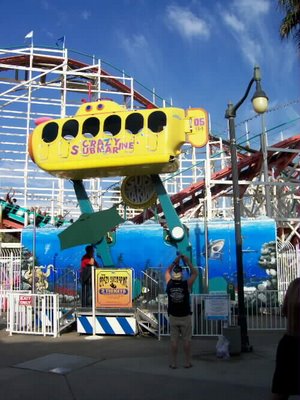 Some new low-floor cars are in service on the northern line. I didn't see any of these downtown.
Posted by Stephen Karlson at 00:11