THE GALES OF NOVEMBER, REPEATED. No chance of a bike ride to the office or of wearing sandals today. Wintry conditions prevail in the North West Frontier, and commuters on Metra's Burlington Line were delayed by weather-related signal failures. 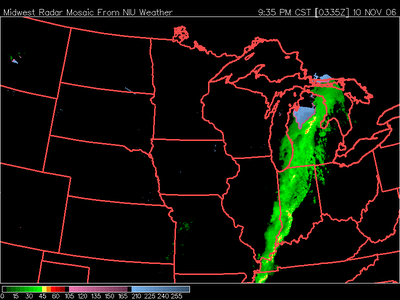 Radar Image from Northern Illinois University.
A local weatherman noted repeatedly that the storm pattern looked a lot like the one that hit the upper Lakes on November 10, 1975, the day Edmund Fitzgerald foundered. Fitzgerald tribute information is summarized here. There's a new book, Mighty Fitz, that I reviewed here. I've been working on a few glasses of Edmund Fitzgerald porter from the Great Lakes Brewing Company, and probably have taken at least 29 sips in the past hour.

"A ship on the ocean might run 500 miles out of its way to avoid a storm. If you go 50 miles out of your way on the Great Lakes, you're in somebody's corn field." David G. Brown, author of "White Hurricane", speaking about the Edmund Fitzgerald disaster on Lake Superior on Nov. 10, 1975; all on board (29) perished.

Fitzgerald went as far out of her way as feasible to avoid the first part of the storm, hugging the north shore of the lake. But when the winds shifted as the center of the cyclone passed over the lake, she was exposed to waves over the full fetch of the lake.
Posted by Stephen Karlson at 23:30