IT'S STILL THE GREATEST SPECTACLE IN RAILROADING. I had business in Chicago this morning, a teacher tranining seminar with an emphasis on transportation and the Illinois economy. One presentation featured Bill Testa of the Chicago Fed, who found this graphic in a World Business Chicago report titled "The American City at Middle Earth" (.pdf) 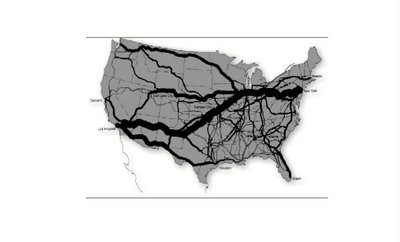 I will have occasion to refer to this map, which shows rail traffic volume, in a few days.

First, though, the getting there, followed by the going home. "Getting there" means a 6.41 departure from Elburn on Union Pacific's Train 26 that arrives Chicago at 7.55. If all is nominal, Union Pacific's Train 616 is arriving on a parallel track from Crystal Lake. The approaches to North Western Station fly over the north throat of Union Station, where Milwaukee 2212 due in at 7.53 from Roselle and Milwaukee 2112 due in from Fox Lake at 7.54 should have crossed in front of 26 at Western Avenue, and North Central 106 will be due from Lake Villa at 8.06.

There were a number of loaded coal trains keeping out of our way, and a hopper train and a stack train waiting for a chance to go west. I left westbound at 3.40, before the rush started, and a number of coal loads and stacks were going through town as well.

Other countries may have more frequent passenger trains, and the Long Island might handle more people. I defy anybody to match Chicago's mix of commuter volume and freight tonnage. (You Europeans with those wheelbarrows on rails, just pipe down.)
Posted by Stephen Karlson at 23:15