WE GET CITATIONS. Joanne Jacobs picks up the commentary on the three, now two, freshmen, the Milwaukee Journal-Sentinel has been following through Wisconsin-Milwaukee. She recommends College Puzzle's advice to matriculants so as to avoid some of the difficulties the three encountered.

3) Part-time attendance (less than 12 credits per semester) at any point proved to be detrimental to the ability of students to complete degrees. But continuous part-time enrollment is less damaging than excessive stop-out periods.

4) Earn at least four credits in the summer.

5) Do not withdraw from or repeat courses unless it is absolutely necessary. No-penalty withdrawals hinder degree completion and may be the principal cause of increased time-to-degree.

6) If you have academic trouble in the first academic year, the second year is crucial because many students recapture their momentum in the second year and complete gateway courses in basic subjects.

Students are not passively passing through an academic pipeline to college completion. They can be active in creating their own path to college success. 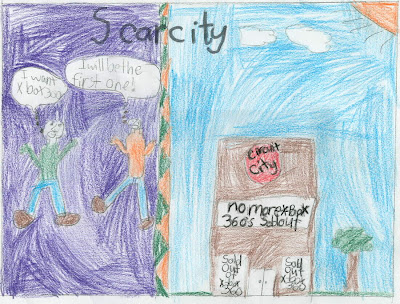 A second grader can understand that scarcity need not be conceived of in Malthusian terms.

I realize that some universities claim that having a top-ranked athletic programme will attract better scholars, better students, and more donations for academic programmes. I have yet to see any evidence supporting this argument.

King Banaian, who must have access to my great-grandfather's passport, provides a bit of the evidence.

There may be indirect confirmation of the link Toma and Cross identify in my back yard. The recent successes of Northern Illinois football, at the margin, might be bringing more students to campus (although the population boom in Greater Chicago and the Corn and Cheddar Free Trade Zone must not be discounted.) But without the efforts of a lot of people to hold the line on academic standards and staff development during the years of budget cuts and losing streaks, we'd not be able to serve those additional students well at all.

Posted by Stephen Karlson at 15:22