SECURE THE RHUMB LINE. No posts Wednesday as I was occupied with a basketball game. The officials are conferring here to determine whether the game is over, or if Northern Illinois took a timeout with 0.7 seconds remaining. 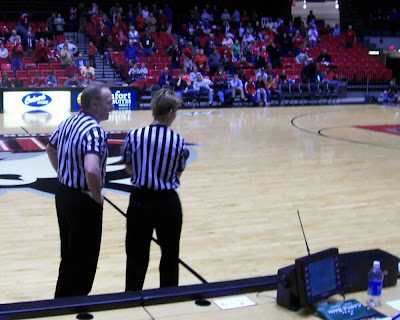 The dramatics arose after the team took seriously the concept of staying between their opponent and the mark.

In a wacky final sequence, Jessie Wilcox blocked a three-pointer, the officials put seventh-tenths of a second back on the clock and the Northern Illinois women's basketball team hung on for a 73-70 victory over Toledo at the Convocation Center.

In victory, there can also be learning opportunities.

Just four days after losing a winnable Mid-American Conference game at Central Michigan, the Huskies nearly let another game slip away on Wednesday, but pulled out their 17th win of the season to match their highest win total since 2001-02.

After the Huskies, still battling for a first-round bye in the MAC tournament, took a 16-point lead four minutes into the second half, the Rockets battled back to within one point on four occassions, but never captured the lead.

That big lead, and a comparable big lead in the first half, established a seasonal best.

NIU wasn't done with the threes yet, as it hit five more in the second half, ending the game 13-28 from beyond the arc.

NIU's thirteen makes from 3-point range is a season high for the Huskies, breaking their previous best of 12 against Illinois State opening night.

From the rest of the game, the two team battled with the largest lead for either team being six by NIU.

Yet in the end, one was the closest Toledo ever came to regaining the lead thanks [to] Toledo turning the ball over six of it's [c.q] last 11 possessions.

There is more work ahead.
Posted by Stephen Karlson at 23:23

Email ThisBlogThis!Share to TwitterShare to FacebookShare to Pinterest
Labels: basketball