VERMEER QUARTET. I made time Wednesday to attend the Vermeer Quartet's final performance. (The University's statement is instructive: apparently this quartet was among the pioneers in choosing a name other than of a composer or of a city, and their choice inspired some student wags to name their quartet after another well-known painter.)

The opening segment featured the Mozart K.589 in B-flat and the Janacek No. 1 "Kreutzer Sonata," program music with a soap opera theme. After intermission, the Schumann Op. 44 Quintet in E-flat, adding Prof. William Koehler on piano. 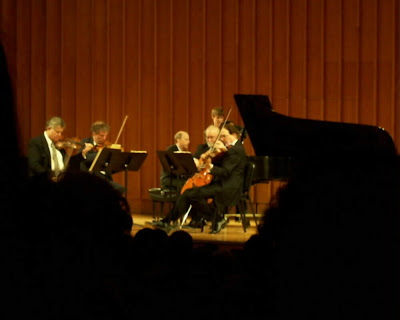 The chairman of the music department noted that at the time the University recruited violinist Shmuel Ashkenasi, the University was barely a university, the campus was much smaller, and DeKalb, [despite having train service to Chicago -- ed.] very much a small town on a featureless plain. He signed on anyway. Although the Quartet is in retirement, the musicians will remain active, some at Northern Illinois and some elsewhere.

Thank you, gentlemen.
Posted by Stephen Karlson at 23:52