WHERE THE STREETCAR BENDS THE PARKING STRIP AROUND. The April program at the Central Electric Railfans' Association featured David Wilson's Masters' thesis at the University of Illinois-Chicago investigating the effectiveness of streetcars in urban development. The program highlights an important objective in railway preservation efforts. There are fewer of us each year who remember the North Shore Line, let alone the country trolley or the small city streetcar. Preservation efforts must appeal to the next generation of electric traction enthusiasts. For example, the extremely complicated Boeing-Vertol cars for the San Francisco and Boston streetcar subways (did the people at Boeing really think that a streetcar door with more moving parts than a 747 door was an improvement on the railroading art?) are all now out of service, with a few in preservation, and, with a nod to contemporary technology, the class is in virtual preservation. The good news for traction enthusiasts of all ages is that a new time of the trolley has come.

Electric streetcars are light-rail, too, but they're less expensive because they use lighter cars, fewer cars and shorter tracks that share the road with cars and buses. And they evoke many emotions, from a sweet longing for the good old days to the passion of Marlon Brando's primal cry — "Stellaaaaaaa" — in A Streetcar Named Desire.

"Streetcars have sex appeal," says Len Brandrup, director of transportation in Kenosha, Wis., which opened a 1.9-mile line in 2000. "It resonates with folks. … Developers don't write checks for buses."

Most streetcar lines stretch for less than 5 miles compared with 10 to 20 miles for light rail. They've become so appealing that some developers are helping pay for the systems, says Shelley Poticha, president and CEO of Reconnecting America, a national non-profit group that works to spur development around transit stops.

Some streetcars are vintage and refurbished. Others, such as Tampa's, are new trolleys designed to replicate the look of old. Yet others are new and look modern.

The full range of contemporary streetcars appears at the Vintage Trolley Systems website. The Little Rock and North Little Rock cross-river line is an example of the retro-look trolley, based on a 1920s design. Some things about the trolley are anything but retro. 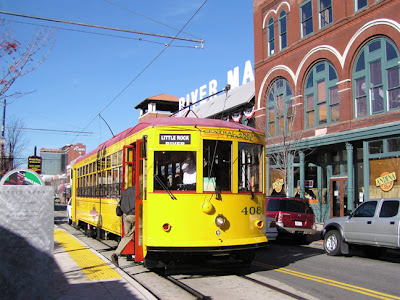 Note the extension of the curb into the street, affording the passenger an easy step up into the car. Compare with the Milwaukee street scene shown here, where the passengers wait for the car on a mis-named "safety island" that's between two lanes of traffic. In Little Rock and a number of other contemporary streetcar projects, the curb lane, which is marked for parking, ends where the car stop begins, thus taming automobile traffic, and forestalling drivers from executing the aggressive right-on-red-never-mind-the-pedestrians maneuver that enhances the urban experience in far too many cities.

Portland, Oregon, has also gone with the streetcar concept to supplement its existing light rail system, with one line using replicas of turn-of-the-twentieth century monitor roof cars and another using the latest Skoda streetcars from the Czech Republic. (Look carefully at the pictures, a few illustrate the use of what was once the parking lane for a loading platform.

The streetcar concept is so new that there's a primer in Portland. Gee, has anybody considered that one could connect streetcar lines to other streetcar lines with something resembling a higher-speed electric railroad?
Posted by Stephen Karlson at 23:23