SERIOUS RETRO RAILROADING. The St. Ives Bay Line offers a taste of old-style branch line railroading along Cornwall's Atlantic Coast. There's quite a serious climb out of the station and through the ridge in the distance. The branch was the last piece of Great Western seven-foot gauge track to be built. Conditions are definitely less summery than they might be at Sleeping Bear Dune let alone San Juan Capistrano, but a few brave souls are swimming. 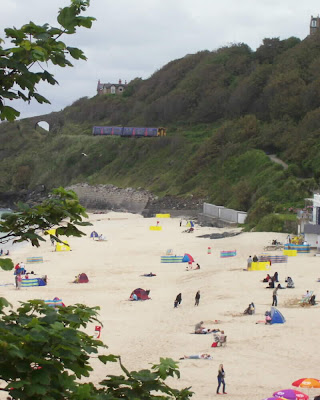 The branch joins the Great Western main line at St. Erth, where a tower (signal box there) with armstrong levers controls the switches (points) and lower quadrant semaphores. Note the allergy of a British railroad to a facing-point switch. 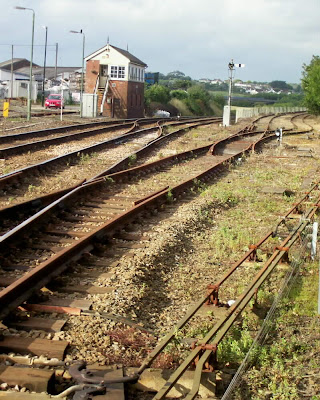 That's not the remnants of abandoned track at right, it's a split-point derail (catch points) intended to prevent any unauthorized use of the main line by a switch engine, or, worse, a car set into motion by the wind.

Every so often, there's a twanging of the control wires and a semaphore clatters to "clear" (which is pulling "off" there and "on" here.) It's a bit disconcerting to see a signal at clear with the entire train behind it, as here, but the semaphore can be used to alert the crew of a passing train to trouble even after it has accepted the signal, and the lever is returned to normal only after the train crew is not able to see it. 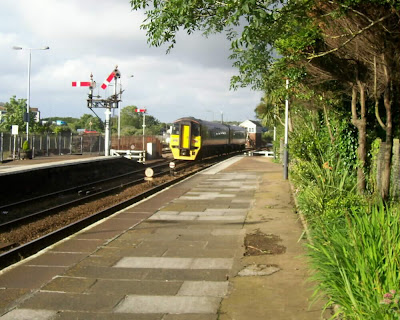 There's no doubt whose station this once was. Once upon a time, a section of the Cornish Riviera Express would reverse here to be taken directly to St. Ives, which must have been some stunt on a steeply-graded line with little in the way of terminal facilities (today, it's a platform with ticketing machine and fencing). 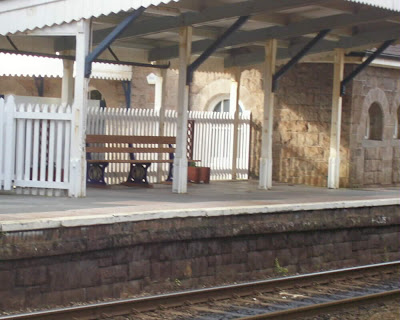 Down the line at Penzance, the evening sleeper train to London Paddington has been placed at the station. Although that diesel has a very British number 57 605 and name Totnes Castle, inside it is an Electro-Motive diesel. It sounds like a train ought to. 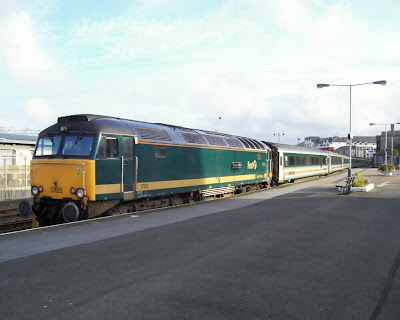 Cross-posted at European Tribune.
Posted by Stephen Karlson at 22:07