A BRISK WALK FROM THE STATION.

Frequent rail transportation is more useful if there are worthwhile destinations not far from the station. As part of our Farewell to Summer, we'll see a few such destinations in the next week or so. Tonight, a look around Milwaukee. (There's a previous look around Tourist Milwaukee that's also an easy walk from the station. For comparison with some of the other Illinois corridors, many of the Lincoln sites are within walking distance of the Springfield station, the Carbondale service offers easy access to Southern Illinois University and the University of Illinois, but the Quincy service sets passengers down at a suburban station that is only slightly less remote than Tiverton Parkway.) On my most recent trip, I headed west. It was portrait day for the Marquette soccer team, just more evidence of what eight year old girls can aspire to. 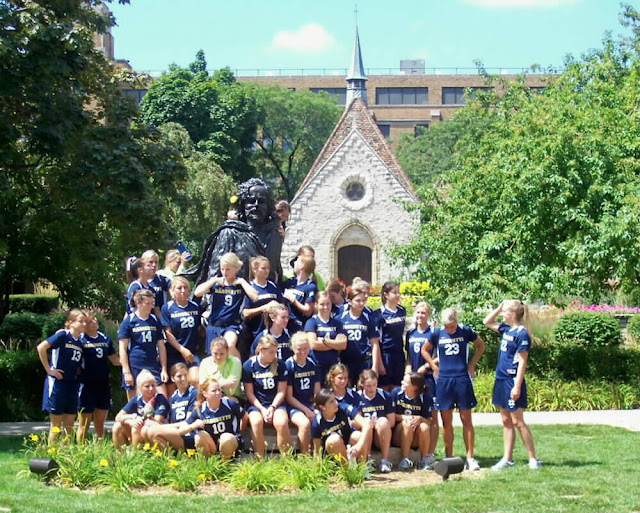 Behind the team is the St. Joan of Arc Chapel, which the university describes as


to our knowledge, the only medieval structure in the entire Western Hemisphere dedicated to its original purpose: Ad Majorem Dei Gloriam.

That "medieval structure" requires a bit of qualification as, although much of the building is eleventh or twelfth century, there are pieces of solid Lannon stone in the current chapel. It does remain in use for Sunday services during the academic year. There may be older devotional buildings standing in Wisconsin, but their native builders have long since abandoned them. More about those sometime in the future.

In France, these Roman urns held oil and water for the chapel. 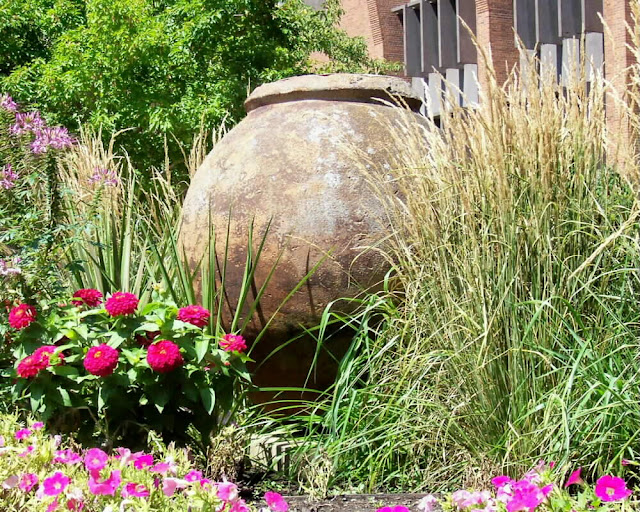 Some parts of the tapestries in the sanctuary are fourteenth-century, although they're reinforced with more recent fabrics. It probably hasn't helped some of these objects to be downwind from Falk and other heavy industry. 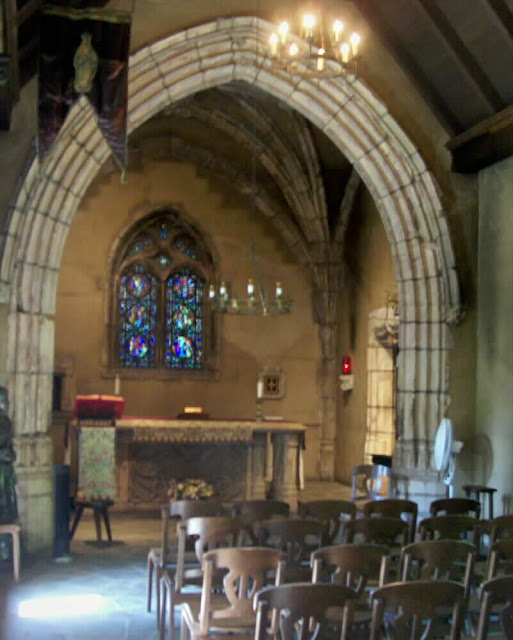 The chapel includes medieval artifacts from other European churches. This altar presents a Celtic allegory to the Trinity -- note the tri-monad and the recurring shamrocks. 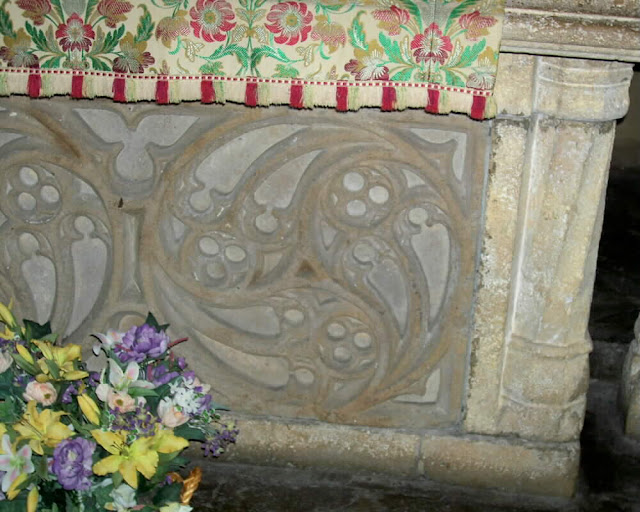 The crypt cover for


Chevalier de Sautereau, a former Chatelain of Chasse, who was "Compagnon d'Armes" of Bayard (1473-1524), the famous French knight "Sans peur et sans reproche" (without fear and without reproach)

came with the chapel from Chasse. The knight's descendants requested that his remains remain in France. 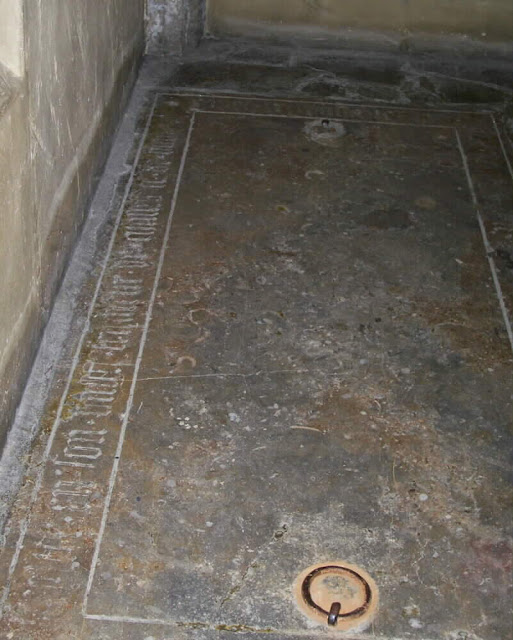 The most famous artifact in the chapel is the Joan of Arc Stone, which came from some other church in France. 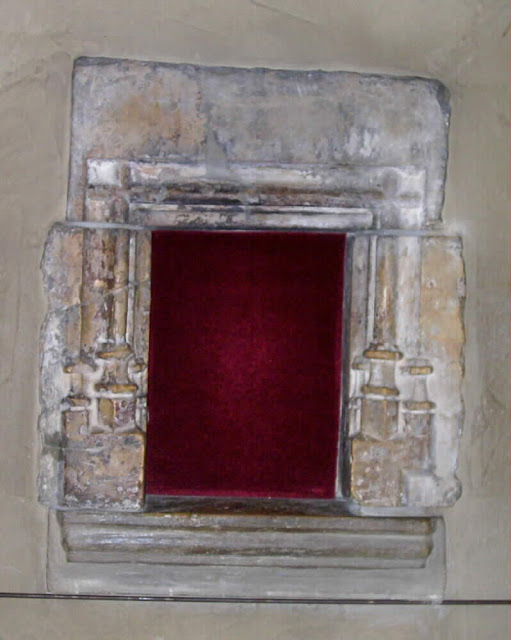 
They tell of how Joan of Arc (1412-31) prayed before a statue of Our Lady standing on this stone and at the end of her petition kissed the stone which ever since has been colder than the stones surrounding it.

Is it? Go and judge for yourself.

At the east end of campus, the transept spire of Gesu Church echoes that of its younger older neighbor. 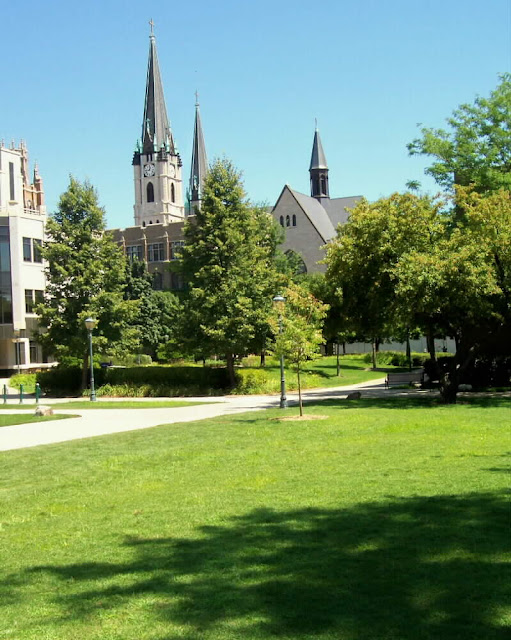 The area once known as Commission Row, and now as the Historic Third Ward, is about a half mile east of Marquette University. At one time, Broadway was lined with these produce brokers' warehouses, where fruits and vegetables were on display under the awnings, and the streets were full of trucks loading produce for distribution to mom-and-pop grocers and restaurants. Just-in-time refrigerated container load delivery is probably safer and cheaper but not so colorful. These last two warehouses await some sort of yuppification or perhaps the wrecker. 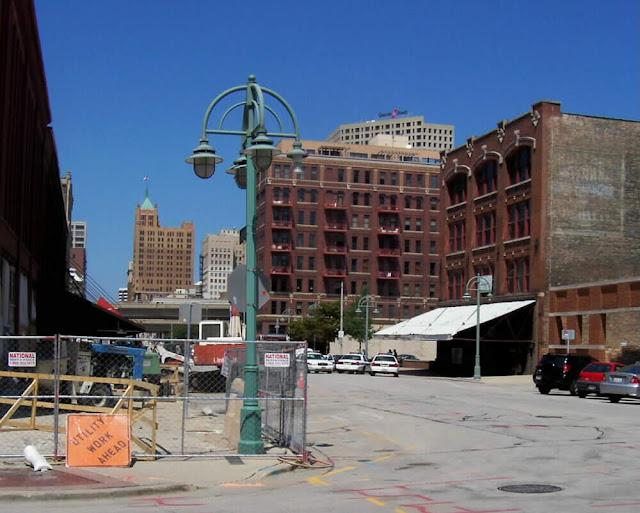 On Milwaukee Street, where the Route 14 trolleys used to run, the gentrification is well under way. I believe "Landmark Building" is the original name. This part of Milwaukee Street also used to cater to the brokers and jobbers. Just to the east was the pink church in the Italian style that, along with the North Western Depot and some of Commission Row, had to go for the never-finished lakefront expressway. 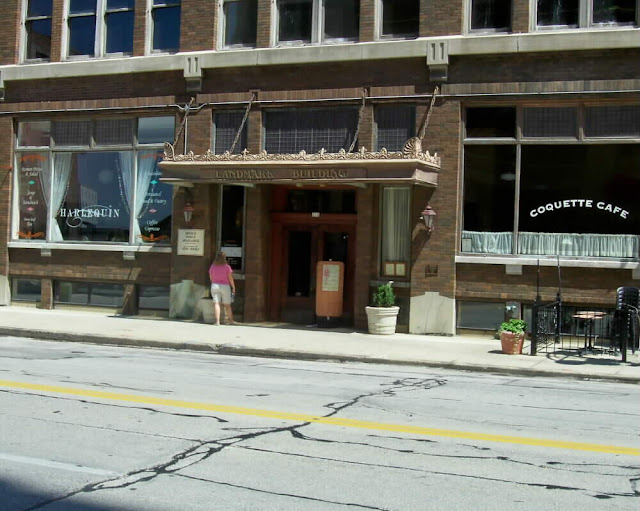 The retail function of Commission Row has been replaced by this Milwaukee Public Market, which is on St. Paul Avenue, just east of the river, and close to the station. 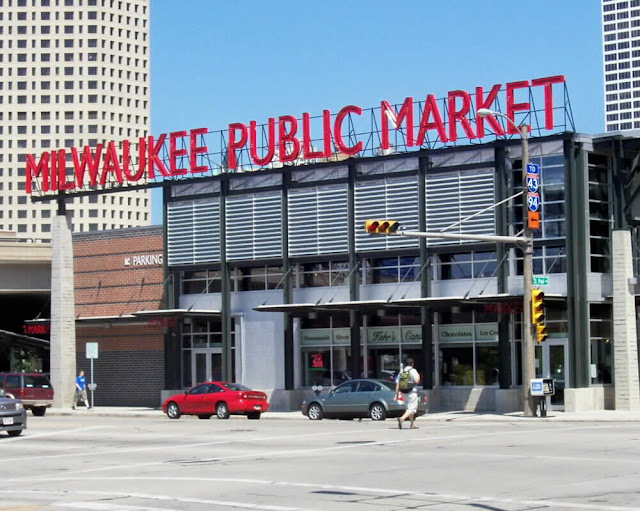 Inside, fresh produce, lots of cheese and sausage (this is Wisconsin) and some lunch counters. Not a bad place to pause for lunch. 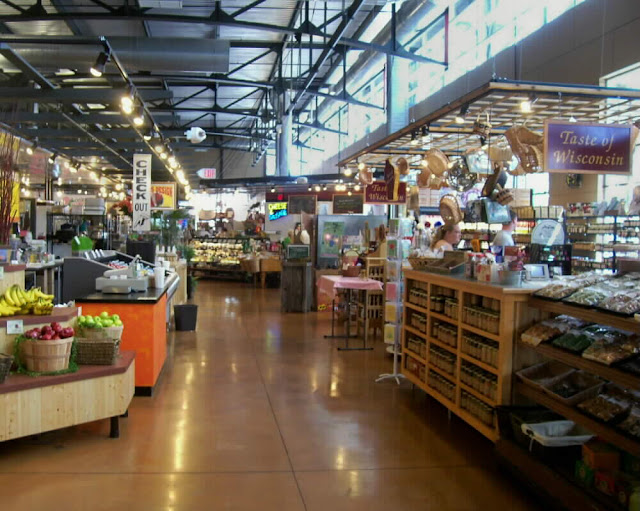 Close by is the Milwaukee Ale House, which also serves food. The dining area has a view of the confluence of the Milwaukee and Menominee Rivers, as well as the east approach to the station. The Sheepshead Stout at the bar is pretty good. Give yourselves twenty minutes to get back to the station and on the train.
Posted by Stephen Karlson at 22:50