PLAYING GIVEAWAY. Poshard's Plagiarizers made a visit to Northern Illinois University for an evening football game. I took a break from setting up the new quarters to watch the game. This Huskie kept an eye on the breakfast bar. 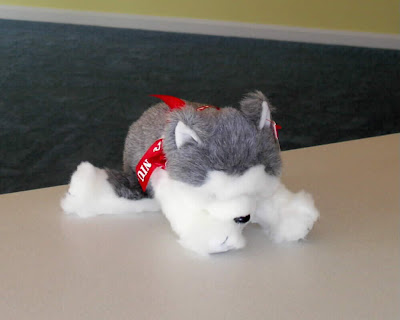 This sunroom and deck ought to work well for pregame festivities. 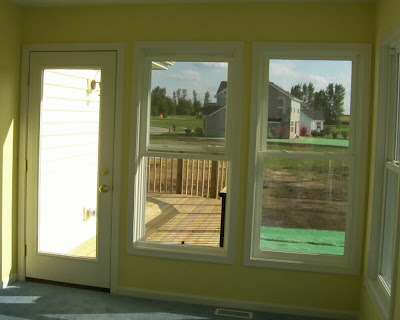 In case anybody from Huskie athletics is reading this service, here is what Yankee frugality looks like. Unlike some people we know, I brought a dehumidifier from the old house to the new house. The computers are coming over too. 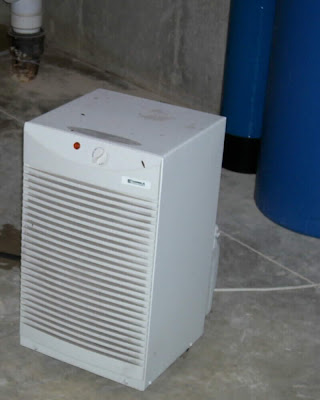 Pregame festivities now sprawl over the entire west campus. These bouncy sets occupy the soccer practice fields. The corn boil was just to the south. 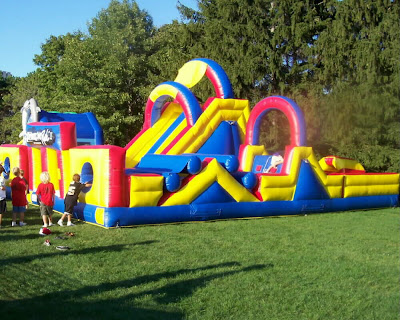 The new locker room is already in use, with those new computers and exercise machines. (If I find out where the old computers cascade to, I'll advise here.) The athletic department is attempting to pay for this facility with ticket revenues and donations, and many donors were recognized at a pre-game ceremony. (There might be naming opportunities for computers and ellipticals. My mind contemplates some wicked possibilities...) 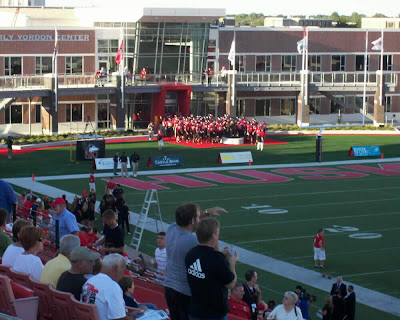 Then comes the game. Although Southern Illinois scored first, on a long pass interception, at the fireworks display the Huskies were up 21-7 on the Plagiarizers. 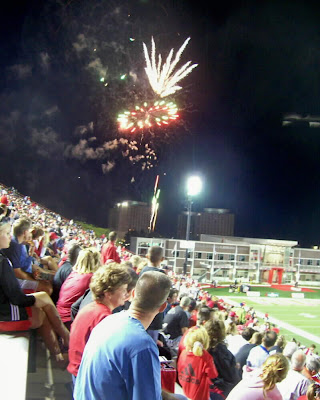 The third quarter was odd, with Northern Illinois playing a number of reserves on both sides of the ball, and Southern Illinois using a running game that used a lot of time to little effect. The fourth quarter was odder still. With about 11 minutes to go, the Plagiarizers managed another long interception return for a touchdown, closing the gap to ten points. Still no big deal. Then, with just over a minute remaining, the Plages managed a touchdown after a few third- and fourth-down conversions. Still shouldn't be a big deal. Everybody in the stadium knows an onside kick is coming, and there's a longer field now even if the kicking team recovers. Oops.

SIU safety Clayton Johnson recovered the onside kick to give his offense the ball at the Salukis' 43 with 58 seconds remaining. Hill needed only five plays to produce the winning score, throwing 30 yards to wide receiver Justin Allen with 22 seconds left.

NIU was repeatedly unable to come up with a needed stop late as the Salukis benefited from two tipped passes that ended in completions, converted four of six fourth downs and stayed in rhythm with a no-huddle offense and Hill's accuracy.

The local paper sums it up.

When the Huskies dissect the film of Saturday's game, the loss won't be any easier to stomach. The Huskies had a victory in hand, before a talented and determined SIU team rose up and stole the win.

We're about to start our first full week of classes (yes, there's usually a Monday-Friday before Labor Day, but Thursday night ahead of that long weekend is often temptation to get away) and perhaps the team is also about to get down to business.

“I'm disappointed, but we have no one to blame but ourselves,” [Northern coach Joe] Novak said. “We'll get better, we'll learn from it.”

The saving grace, after a busy day of arranging and moving stuff and watering, watering, and a disappointing end to the game, was that Wisconsin's football team didn't go along with Nevada-Las Vegas attempting to pick up the 10-2 upset once again.
Posted by Stephen Karlson at 20:20