THERE'S A PROTOTYPE FOR EVERYTHING. Here, two pair of Soviet TE-3 freight diesels have been cascaded to the space program for a rollout of the Buran launch vehicle. 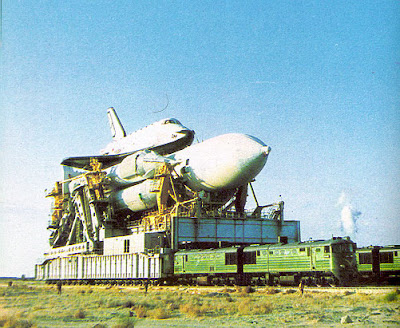 Wikimapia image. (In Russian.)
The TE-3 is a Soviet rip-off of the Fairbanks-Morse Erie Built, right down to the submarine-inspired cooling system with the huge radiators aft. Before Mao and Khrushchev had their falling-out, the Chinese made socialist use of the TE-3 design in their own DF and DF3 diesels. Each of these classes had domestic versions of the Fairbanks-Morse opposed piston diesels, and shop forces no doubt cursed having to maintain them in Chinese, Russian, and all the languages of the prison house of nations.

Although the latest Russian passenger diesels have two cabs and V-type engine blocks, some of the styling elements of the TE-3 remain. Witness the TEP70 class, built at the same factory that built the 4-14-4. 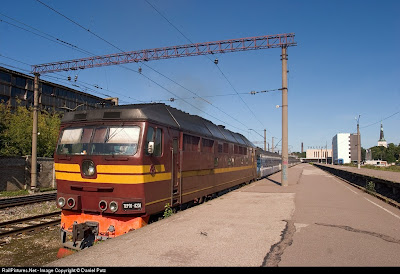 Tallinn, Estonia, on the eastern end of the Wisconsin Central, August 18 2005.
Daniel Putz photograph from Rail Pictures.
Posted by Stephen Karlson at 23:49