IN THE EVENING CAN THE DAY BE PRAISED. Meteorologists use the word "derecho" to describe a "widespread and long lived windstorm that is associated with a band of rapidly moving showers or thunderstorms." That description would certainly apply to a band that got rolling somewhere near the Cities and made its way into DeKalb just before sundown. 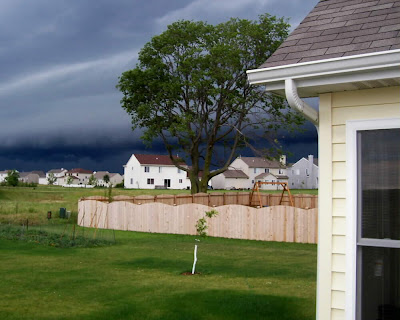 With sunset, this one broke up somewhere south of Joliet and Kankakee.

RUNNING EXTRA. The line started at first light Thursday in North Dakota and it aggravated airport delays at O'Hare (no surprise) and Midway (where delays are less common).
Posted by Stephen Karlson at 23:55