AUGMENTING RAILROAD AWARENESS. With higher fuel prices and air carrier retrenchments, where there's a passenger train, there will be people. When the passenger train has a steam locomotive, there will also be spectators. June's rains forced a postponement of the Milwaukee 261 reprise of the Wisconsin Dells excursion from late June until last weekend. There was a bit of rain on Sunday morning, but most of the ride was under sunny conditions. This engine was never streamlined, although the solid pilot does add a hint of speed, and it contrasts well with the stays on the Sixth Street viaduct. 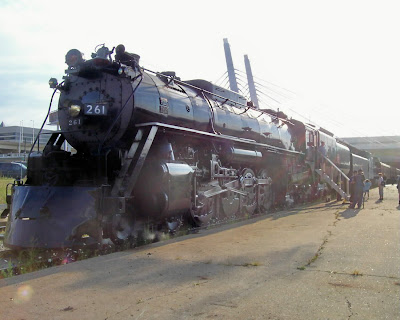 We made a good start from Milwaukee and a good assault of the ridge west of Wauwatosa. The dispatcher sent us on the more steeply-graded line which caught many Brookfield-area trainspotters by surprise. (Your best bet to railfan a rare move is to wait at Elm Grove or at Brookfield rather than attempt to outguess the dispatcher on the split-grade.) Then we started to roll, as this video of Oconomowoc attests.
This trip, unlike the one offered two years ago, did not make servicing stops in Columbus, or at Portage westbound. We did stop in the Wyocena siding to adjust sticking brakes. Despite that stop, the train reached Wisconsin Dells five minutes before the planned 11.30 arrival. Here's the traditional view of a Hiawatha leaving Wisconsin Dells. I was at lunch when the eastbound Empire Builder went through. It reached Chicago five minutes late that Sunday.


The 261 organization has now supplied information about those Boston and Maine-looking coaches. They are Pennsylvania Railroad Congressional series coaches that Amtrak rebuilt as 76 seat "Clocker" cars for the service that officially wasn't commuter trains between New York and Philadelphia.

There's enough time in the Dells for one of the short boat cruises, or a leisurely lunch, but not both. The way the train and the railroad performed, a faster timing or a timing with a later Dells departure are possible. One of the passengers, a gentleman with railroad experience, told me Canadian Pacific was extending sidings and replacing the second track on the line west of Brookfield.

The New Lisbon trip appeared to be well-patronized, and it returned with time to spare to board and get underway for Portage, where a servicing stop had been planned.

A passenger pointed out this crime scene facing the tracks across Oneida Street. There's no such thing as getting away from it all. 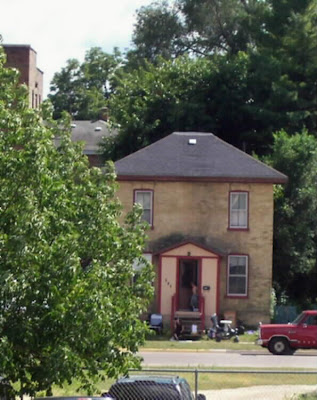 Once the servicing is finished, the train leaves Portage. It is fitting that the servicing stop is at Portage, which was the east end of the fastest scheduled steam timing in the world, Sparta to Portage with the Morning Hiawatha.
We took siding west of Watertown for a freight train. At Nashotah, the westbound Empire Builder was waiting for us. We probably put on quite the show for its passengers. The show continued past Pewaukee Lake. Look closely, you'll see the pirate on a pier, and some new rip-rap suggesting the severity of the rain in June.


Despite some extremely slow running from Hawley Road east to Milwaukee, our arrival was at 5.25 against the expected 6 pm. Chicago passengers, if any, would have been able to catch the 5.45 Hiawatha.

Thus ended a pleasant late-summer train ride, and some of the train crew were talking about seeing us all next year.
Posted by Stephen Karlson at 23:32