FORTY YEARS AGO. British Railways ended routine steam operation on 11 August 1968. Some observers questioned the decision to run a trade deficit to import oil to power diesels of uneven capabilities.

Because the country was relatively prosperous at the time of conversion, many of the steamers made their way into preservation. The North Sea oilfield took care of the oil imports, at least for the time being, although British Rail and successor operators saw the wisdom of importing SD-40 and SD-70 platforms adopted to the British loading gauge. 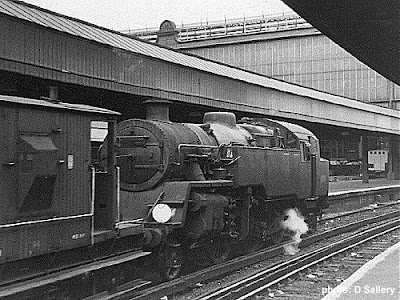 Waterloo Station, near the end.
David Sallery photograph.
David Sallery's site depicts steam operation in the last few places where the steamers were allocated.
Posted by Stephen Karlson at 22:57