In High Green and the Bark Peelers, author R. M. Neal intended that as a tribute to the gentlemen who were his host on Boston and Maine's 10 am nonstopper, the Kennebec Limited, which reached Portland in two hours. By 1965, Patrick McGinnis's asset strippers had ripped out most of the second track on the Portland Division and ended the passenger trains. Guilford Transportation managed to reunite the Boston and Maine with the Maine Central, and they operated a freight railroad after a fashion, although they put many an obstruction in the way of a revived passenger train service between Boston and Portland. Despite Guilford's continued non-cooperation, the service has been expanded, ridership is up, and passenger-train advocates are making the case for more trains as well as a possible extension of the service to Freeport or to Augusta or to Bangor. (It may be a bit much to ask for all-sleeper Bar Harbor Expresses from Philadelphia by way of Worcester, at least of a government agency).

During last month's excursion east, I took a day to sample the line. Again, thanks to a long-ago excursion, collecting all the mileage did not have to be the primary objective. Where, then, to turn back? Several people told me the Portland station was somewhat removed from the commercial parts of Portland, which made a turnback prior to Portland more attractive.

Because of the difficulties of connecting North and South Stations in Boston, the Portland service is the sole Amtrak presence in North Station. (The Bar Harbor and the other Official Region to Maine trains had to go the long way around because of that same connection constraint.) Although North Station is new within the past decade, it is still the lower level of a sports arena, and the new station has the same claustrophobic feel of the old one (where, once again, the McGinnis asset strippers sold off many of the public spaces to other uses.) The concourse you see is an expansion of the one as-built. The train gates used to be at the pillars in the foreground. The additional space provides for a few benches. As is the case at South Station, track assignments are ad hoc from day to day with tracks being posted about ten minutes before departure. (On one of my north side jaunts, the Rockport train was posted for track 1 exactly as a heavily-loaded arrival turned up on track 2. Metra is careful not to do that. Admittedly, the old Boston and Maine is not contending with 2,000 Starbucks-charged commodity traders charging off a Naperville Zephyr or Winnetka 400, but passenger loadings are up.) 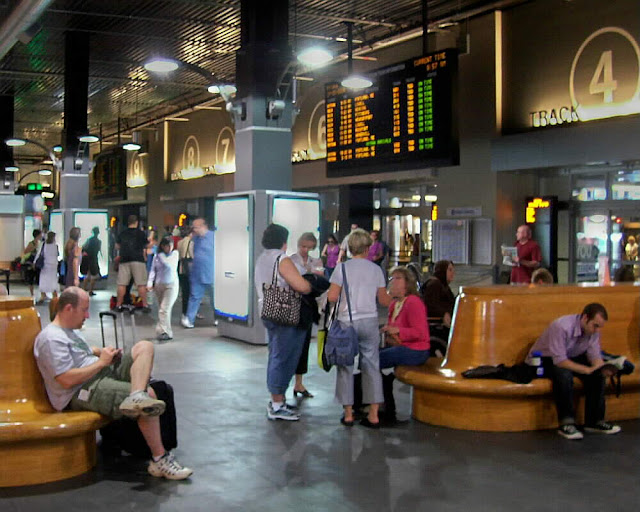 There's a bit of a mystery as train time approaches. The inbound equipment from 680, due in at 8.25, becomes the outbound 681, due out at 9.05. The inbound is listed on the annunciator board as ON TIME although at 8.26 the listing vanishes from the arrivals board. Just after 9 the departure board lists 681 as DELAYED, something that is noted on the loudspeaker, without an explanation of why. The inbound shows up at 9.15. The flip side of not announcing the tracks far in advance is that Bostonians know how to board trains quickly. Business class is just a short walk from the gate.

I did say I was turning back short of Portland. The enthusiasm of the train crews is evident. The delay of the inbound equipment was thanks to Guilford, otherwise known as Union Pacific for dead freight (for some reason, most of the loads were scrap metal and rocks, no time-sensitive Schneider or Yellow trailers or Powder River coal here), failing to bestir itself to clear the time of a first class train. This edition of 361 had a train host from Train Riders Northeast who was offering Maine information and conversing about trains. It transpired that he was planning a trip to Chicago to ride the Empire Builder and he was concerned about a 3 hour connection O'Hare to Union Station. (Given all the implications of cash-strapped airlines and summer weather and O'Hare and Illinois construction season, three hours leaves little margin for error. I suggested that he research the cab connection O'Hare to Glenview, which is a shorter distance, generally on mile roads that, while subject to the maltimed traffic lights characteristic of Illinois, remain fluid, as his emergency bolt-hole.)

And so to Old Orchard Beach for a quick visit to the Quebec Riviera.

A few people got off the train here. Most of the sunbathers arrive by car, and a substantial number of them will have taken the relatively rudimentary highways from Quebec. There's a reason for those Yankee jokes that go "Wouldn't start heah if I were you." Parking lot operators understand rent gradients: you can park at the beach for $20, across the street from the beach for $15, across the street from the tracks for $10, a few blocks up the hill for $7, or at the VFW post for $4 provided you get there early enough. 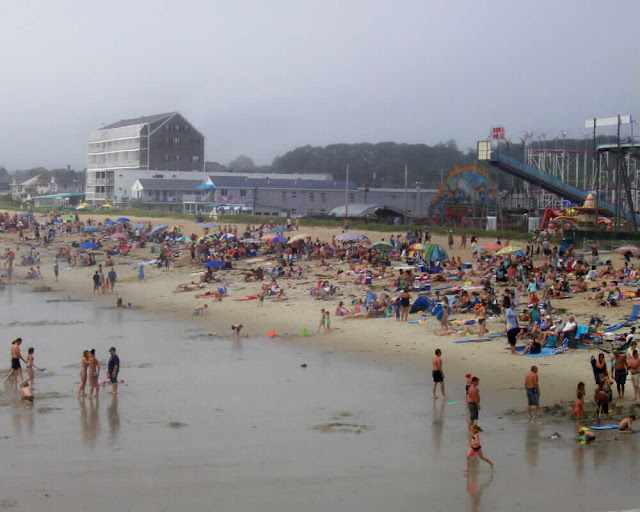 It's not the coldest water I've ever gone wading or swimming in, but those body surfers are probably not going to be out there too long. Perhaps they're fortified with that "two egg ham breakfast" being offered.

A lobster roll and a slice of pizza are in order. 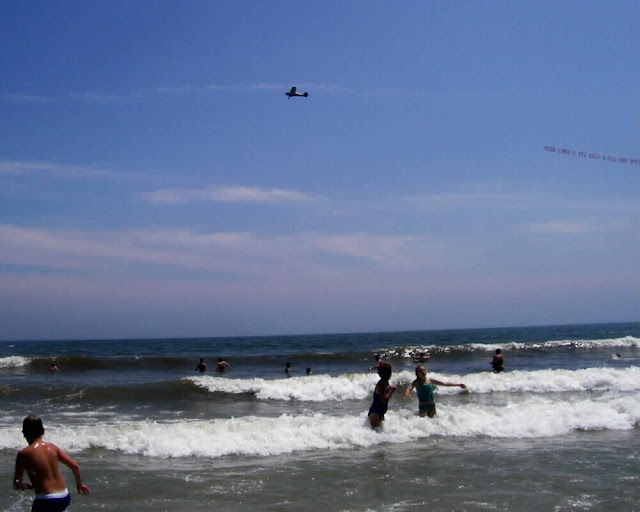 There is a working amusement park. You'd think Gallic drivers or Bostonians would be able to work out their road rage on 95 or 128. 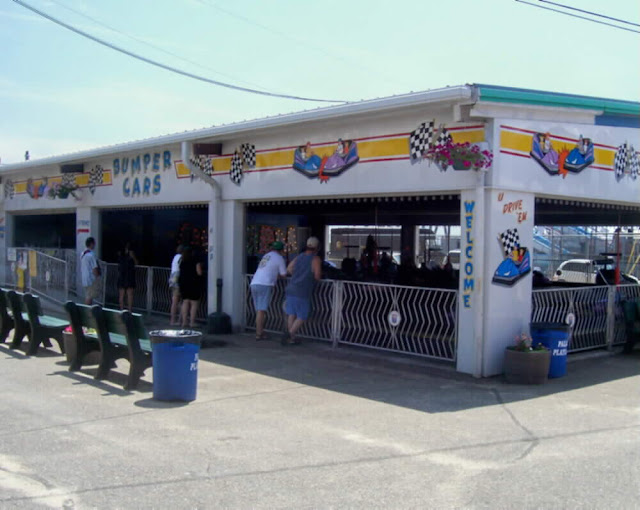 Arabian Nights themed fun houses are rare these days. (So far, the postmodernists and the Islamophiles have not made common cause with the jihadis to brand them as insensitive on pain of beheading.) Francophone fun houses are probably rarer, at least in North America. Le Tapis Volant (didn't appear to be working as such) and Le Mille et un Nuits (being spun in the barrel? Go figure.) 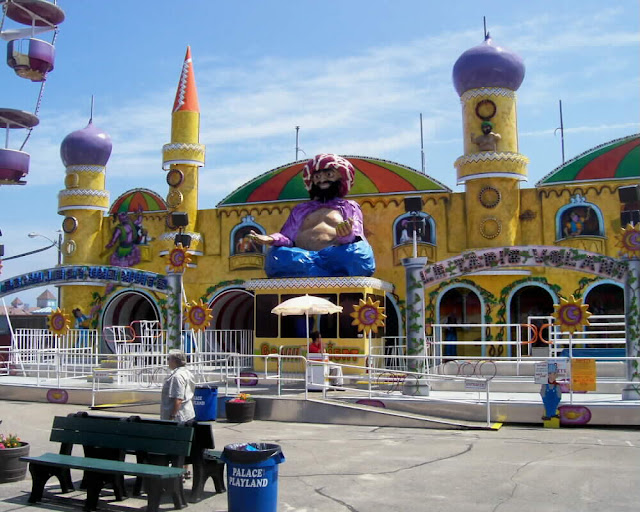 And, a Galaxi roller coaster. 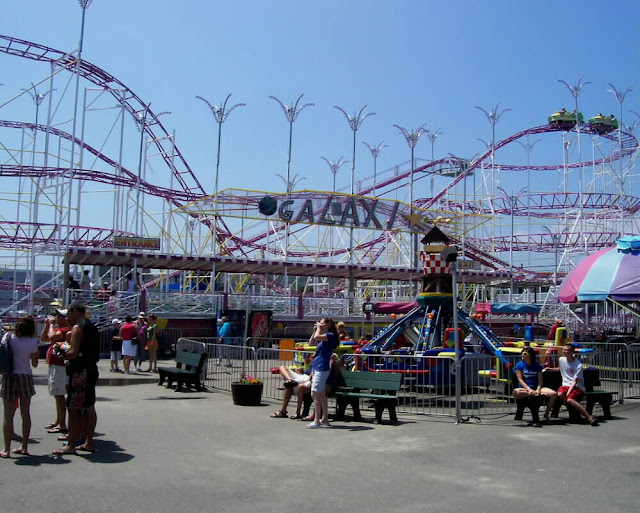 I may have encountered this one at Crystal Beach or a traveling carnival or White Swan Park; somewhere in the research files is that information. At one time, this amusement park operated a Schwarzkopf Jumbo Jet, a third-railer roller coaster (no chain lift, there's an electric motor on each train). I think only the Whizzer in Gurnee remains in that class. 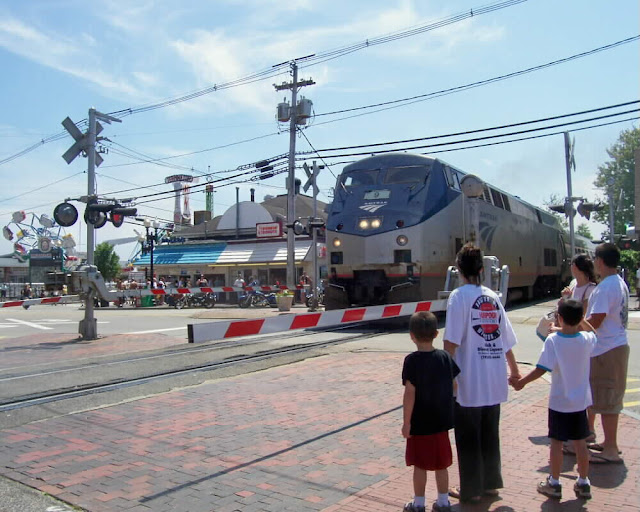 Outbound 363 also showed up a little bit late, with relatively few people getting off. This rake, with 9 leading and 90220 trailing, will become 368 to Boston at Portland. 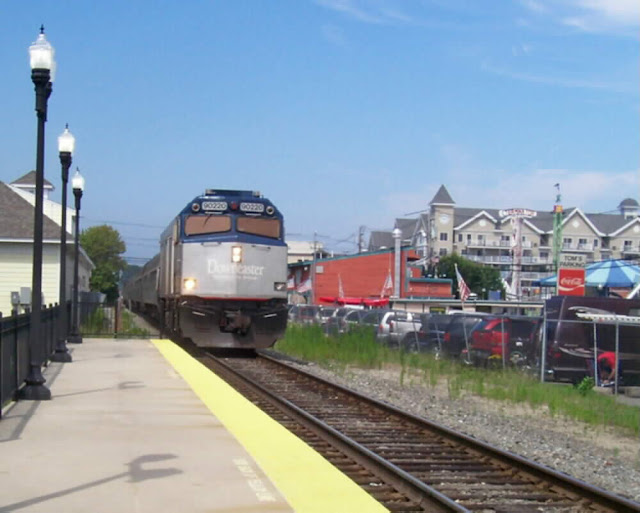 Which, in due course, it becomes. It left Old Orchard at 2.50 and arrived Boston at 5.06. No consist or intermediate stops as it was nap time. The food service, should one not have sought fortification in a lobster roll, includes some regional items (not including lobster rolls) not on the standard Amtrak menu.

The Downeaster, in common with the Hiawatha and some of the Illinois trains, illustrates the potential of passenger rail without the expense of electrification or the obsession with great speed. That noted, better cooperation from the freight railroad would help, and there are stretches of the line, particularly in Maine, where the 79 mph speed limit is an arbitrary handicap on the train's ability to perform. One striking thing about the line is that it is frequently in forests, this despite serving a thickly settled part of northern New England.
Posted by Stephen Karlson at 22:49