EVERYTHING OLD IS NEW AGAIN. A Destination: Freedom columnist suggests that buffing strength standards for railroad equipment address a symptom of unsafe railroading, where the real pathology is separating the trains.

The traditional approach of the U.S. FRA has been to require, with mandatory regulations, some well-intended but very challenging and expensive design standards regarding structural strength, mechanical deformation and energy absorption during a collision between two trains. In Europe and elsewhere around the world there are similar standards and requirements, which stipulate crashworthiness design and collision performance of rail vehicles. But the FRA is unique in the absolutes of these requirements. The consequence is that passenger rail vehicles authorized for use on mainline rail systems in North America are far heavier and typically more expensive than equivalent rolling stock in Europe due to the collision strength and crash energy absorption regulations. That means that most rolling stock in use on Europe’s mainline rail network would not be allowed by the FRA to operate in America.

That observation reinforces one I made. With productivity measures on the railroads pointing toward even heavier freight cars, and the principle of exhaustible resources pointing toward higher fuel prices, perhaps a different approach to passenger safety is best.

In Germany, much of the rail network is equipped today with a system called PZB (the German acronym for point-source train override system) which is coupled to the conventional red/yellow/green signal light masts or semaphore signal masts adjacent to the tracks. PZB uses a system of induction coils mounted by the tracks and on the locomotive or multiple-unit rail vehicle to indicate to the signaling system when a train has past a signal and to indicate on-board the train the status of the signal which it is approaching or which has just past. Without going into a lot of heavy technical detail and explanation, the main purpose of the PZB system is to automatically slow or stop a train which has gone past a red signal.

Look closely at my map, from the July 12, 1953 issue of the Chicago and North Western System's main line public timetable. In the lower right the legend identifies double track and automatic train control, the North Western's version of the German PZB. 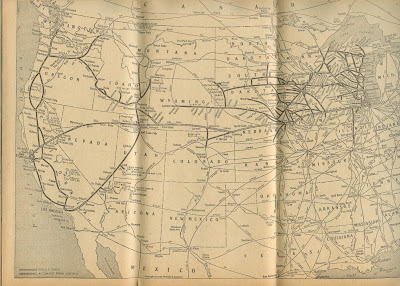 Much of the double track, particularly in Wisconsin, has been reduced to single track, if not abandoned outright. The automatic train control is still in use on the Overland Route, and it is a bit disconcerting to watch stack trains sailing by at 70 mph on what looks like unsignalled track. (Train crews get the warning of tracks occupied ahead from the train control equipment. The equipment also alerts crews to restrictive aspects at interlockings, where there are lineside signals.)

The columnist suggests additional investment in train control technologies has a higher cost-benefit ratio than additional strengthening of the rolling stock.

Designing vehicles, such as trains, to minimize injuries in collisions is a worthy goal. But this approach in the American passenger rail industry increasingly creates ever more negative consequences and unintended side effects. It will never prevent loss of life and limb as effectively as existing technologies which can prevent these collision from happening in the first place. Let the investment in collision prevention begin.

Posted by Stephen Karlson at 23:07