THE FACE OF SUBPRIME? This Stanley Kurtz column suggests the man was participating in an organized protest. 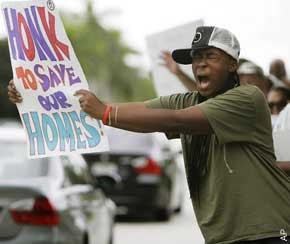 Photograph courtesy New York Post.
I have seen the photograph in other papers. It could be a stock picture, it could be a spontaneous protest. Mr Kurtz is skeptical.

In the name of fairness to minorities, community organizers occupy private offices, chant inside bank lobbies, and confront executives at their homes - and thereby force financial institutions to direct hundreds of millions of dollars in mortgages to low-credit customers.

In other words, community organizers help to undermine the US economy by pushing the banking system into a sinkhole of bad loans. And [Senator Barack] Obama has spent years training and funding the organizers who do it.

THE seeds of today's financial meltdown lie in the Community Reinvestment Act - a law passed in 1977 and made riskier by unwise amendments and regulatory rulings in later decades.

CRA was meant to encourage banks to make loans to high-risk borrowers, often minorities living in unstable neighborhoods. That has provided an opening to radical groups like ACORN (the Association of Community Organizations for Reform Now) to abuse the law by forcing banks to make hundreds of millions of dollars in "subprime" loans to often uncreditworthy poor and minority customers.

Any bank that wants to expand or merge with another has to show it has complied with CRA - and approval can be held up by complaints filed by groups like ACORN.

In fact, intimidation tactics, public charges of racism and threats to use CRA to block business expansion have enabled ACORN to extract hundreds of millions of dollars in loans and contributions from America's financial institutions.

Banks already overexposed by these shaky loans were pushed still further in the wrong direction when government-sponsored Fannie Mae and Freddie Mac began buying up their bad loans and offering them for sale on world markets.

Fannie and Freddie acted in response to Clinton administration pressure to boost homeownership rates among minorities and the poor. However compassionate the motive, the result of this systematic disregard for normal credit standards has been financial disaster.

For decades the government has done things to help Americans to realize the dream, e.g., graciously allowing citizens to keep some of their own money to help pay for the interest on a mortgage (the official term for this is a “tax deduction,” but I prefer my locution since it emphasizes the fact that it is YOUR MONEY we are talking about).

That was the question that led to

* The original Community Reinvestment Act was signed into law in 1977 by Jimmy Carter. Its purpose, in a nutshell, was to require banks to provide credit to “under-served populations,” i.e., those with poor credit.

* In 1995, Bill Clinton’s administration made various changes to the CRA, increasing “access to mortgage credit for inner city and distressed rural communities,” i.e., it provided for the securitization, i.e. public underwriting, of what everyone now calls “sub-prime mortgages.”

Sub-prime loans to people with no experience managing credit are part of the problem. The foreclosures of blighted properties in garden spots such as Cleveland, Detroit, and Milwaukee are the consequence of that policy decision. They're a symptom, however, of a greater malaise.

Anatomy of a bubble

Step 1. The intoxication: “My house is worth millions!” From 1995 - 2005, the number of sub-prime mortgages skyrocket. So did the house prices.

Step 2. The hangover: “Oh my God, my house isn’t selling. What went wrong?”

The television show "Flip This House" wasn't pitched to the slums. Neither were the advertisements for interest-only mortgages on Chicago news and talk stations catering to drive-time listeners, presumably contributing to the congestion on the expressways from the yuppie ghettoes to the Loop.

As Howard Husock, writing in City Journal way back in 2000 observed: “Bank examiners would use federal home-loan data, broken down by neighborhood, income group, and race, to rate banks on performance. There would be no more A’s for effort. Only results—specific loans, specific levels of service—would count.” Way back in 1994, for example, Barack Obama sued Citibank on behalf of a client who charged that the bank “systematically denied mortgages to African-American applicants and others from minority neighborhoods.”

In an era of stable prices and stable interest rates, the policy makes sense. In an era of rising house prices and falling interest rates, a bank that had to be sued to lend to risky borrowers might have its stock bid down. Rising house prices convert an interest-only mortgage into a 20% down claim that can be refinanced as a fixed rate, and an expected lower rate upon refinance is the closest thing we have in economics to a free lunch. Where everyone went wrong was in expecting that appreciation to happen in a year or two, rather than in the more normal six to eight years. Crash.

Posted by Stephen Karlson at 20:48