GETTING SUBJUNCTIVE. Jim Rowen chastises Milwaukeeans: Had talk radio and suburban opposition not sunk a 1997 plan, we’d be riding sleek transit by now. I'm tempted to quip about grandmothers with wheels, but there's an even better subjunctive in the column.

Had plans unfolded on schedule, the starter light rail, with an estimated 21,000 riders on weekdays, would have opened in 2006 and run about 10 miles from the Third Ward to Summerfest, downtown, Miller Park, the Milwaukee County Zoo and the County Grounds.

Talk about a missed opportunity. It would have provided Milwaukeeans with a spiffy transit option in the face of $4-a-gallon gasoline, with higher eventual prices predicted.

The system would have benefited from the city's condo-and-loft boom, a resurgent Milwaukee Brewers' ballclub, the successful Potawatomi Bingo Casino and an expanding Milwaukee Regional Medical Center.

He doesn't suggest that the Curse of the North Shore Line would be lifted, but what the heck?

Substantively, look at this map.

Milwaukee Journal-Sentinel map.
Looks like a through-routing of the old 13 CLYBOURN line and the old 10 WAUWATOSA COUNTY BLDGS line. A century ago, here's what the proposed Miller stop (referring to the brewery, not Miller Park, looked like). 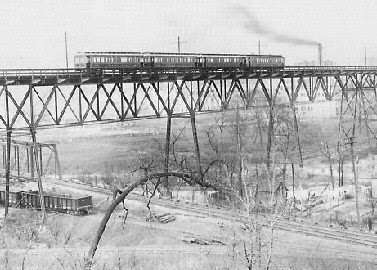 Wells Street Viaduct postcard courtesy
Wisconsin Electric Railway Historical Society.
That's an interurban train, possibly bound for Waukesha Beach or Watertown, or perhaps destined to the Muskego Lakes. The motor car and some of the trailers might have been upgraded at Cold Spring Shops later on. The Wells Street Viaduct lasted to the end of streetcar service, just after the Braves won a World Series.

And long before there was Miller Park, let alone County Stadium, there was a Soldiers Home station. 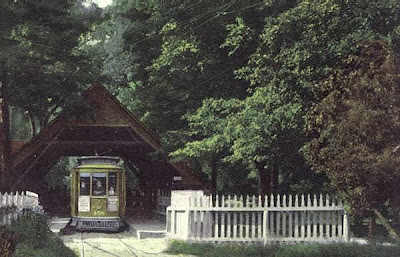 That's close to a century ago also. The West Allis branch of the No. 10 streetcar later curved here to run alongside the Rapid Transit line. There are latter-day pictures here.

Careful readers of the map will also notice that the car stations are Kinnickinnic Station south of Walker's Point and Fond du Lac Station on the northern spur.

Posted by Stephen Karlson at 23:51