THE GREAT DEPRESSION TOOK THE INTERURBANS WITH IT. A few people had the time and the disposable income to set up preservation efforts. A museum for streetcars? [guffaw]. Ferroequinology, fairly or unfairly, does not get the respect enthusiasm for abstract art does. Electric cars are prettier to look at, and they move. That's compensation enough.

Despite the odds, the Central Electric Railfans' Association has lasted seventy years, a time interval in which almost all the electric transit systems went for scrap, only to come back in a new form. The light rail systems of today have their own enthusiasts, and some of them will discover what came before.

The Illinois Railway Museum hosted an inspection tour as part of the anniversary festivities, and they rolled out some infrequently used stock for the enthusiasts to inspect. 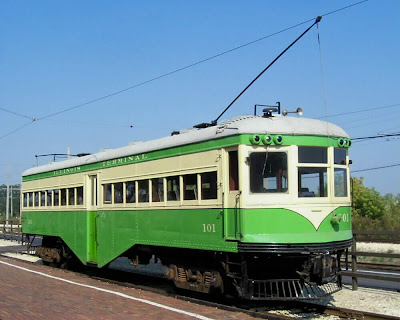 It was built for suburban service east of St. Louis.


The car has a railroad-style communication whistle rather than the traditional traction company bell. Here the motorman works it out of the East Union station trackage and across the trestle that was necessary in order for a preservation railroad to begin operation in the mid-1960s. The car does operate in regular museum service, but only if there is no rain in the forecast.

Although Sand Springs Railway Car 68 looks older than Illinois Terminal 101, it is a 1918 product of Cincinnati Car Company built for the Cincinnati, Lawrenceburg & Aurora Railroad and subsequently sold to Sand Springs as a low-budget off-peak car. 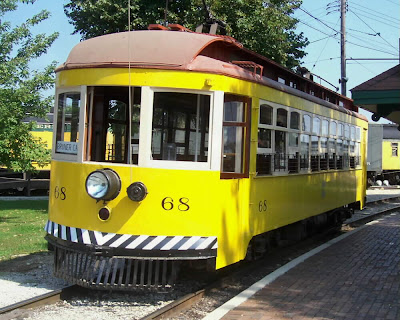 A museum member has been working on this car for 40 years. It has operated on a few special occasions, without passengers. I took this video on the first run of the car with a load of passengers.

The car host explained that some metal brackets at standee level held signs that designated the "colored" section, something required under the Jim Crow laws in effect in Oklahoma. The museum has a single-truck, curved-side Knoxville car that is also a Jim Crow car. That car, however, is not operable.

The museum collection began with Indiana Railroad 65, a 1931 Pullman product built to offer faster, more comfortable service through central and southern Indiana. The cars arrived just in time for the Depression to do its work. This car remains because it was purchased by an Iowa interurban to complement a fleet of similar cars it had obtained from the Cincinnati and Lake Erie, one of which had been destroyed. The rest of the Indiana Railroad fleet went for scrap, aluminum being useful in the buildup to World War II. 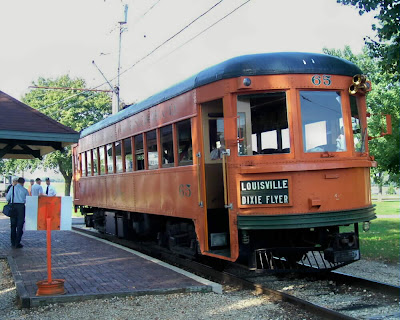 The car offers a smooth, quiet ride. It operates only rarely, and then only as a chartered car. There's only one trolley pole on it, leading to some improvisation to run it in reverse. Humph. The Green Special cars that The Milwaukee Electric rebuilt at their Cold Spring Shops were single-ended cars, but they had a trolley pole for reverse movements.