IT'S A PENNANT RACE. I had some time this afternoon to listen to sports call-in radio from Milwaukee and from Chicago. The Cubs, Brewers, and Cardinals all lost and there are plenty of people with ample time to get worked up about absolutely nothing.

Why the radio yakkers have to take calls from people who want to vent about the Cubs' having played more home games (that will be remedied shortly) or against weaker opponents (if the National League standings were an income distribution a politician would want to redistribute the wealth) and go along with the call escapes me. (I'm not referring only to Milwaukee radio here. Cub fans have that er, tradition of September collapse, to worry about.)

Look at the schedule. 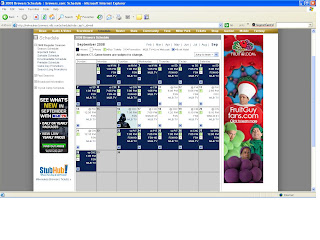 Image courtesy The Wisconsin Sports Bar.
Note the six remaining games between the Brewers and the Evil Empire, er, Yuppie Bears. The schedule reminds me of the end of the 1982 pennant race, where the Brewers held a small lead over Baltimore at Labor Day yet had to win the final game of the season, in Baltimore, to qualify for the playoffs (in those days, there were two divisions). Either Milwaukee or Chicago can win the division. The team that takes care of business in those six games is likely to do so.
Posted by Stephen Karlson at 22:21