1. All-rail passenger service from Chicago to Green Bay.
2. More than one train each day out of Chicago to each and every route end, including the long ones.

I will weigh in on the multiple long distance trains another day. 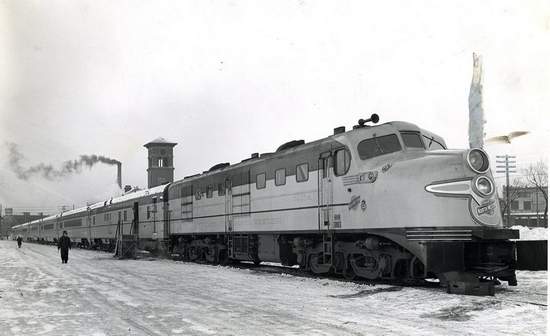 Today, I wish to report that Green Bay has passenger rail advocates.


Passenger rail service fell into decline in the United States not because it wasn't economically feasible but because the federal government forced it into decline, said Ray Ash of Green Bay, an 83-year-old railroad buff who worked most of his life for the Railway Express Agency.

"The government was all gung-ho on building an interstate highway system during the Eisenhower administration," Ash said. "And politicians today would rather fund the airlines."

Often that airline funding included payment for delivering the mail and express. It's a lot easier for a train to make drop shipments.

And somebody else understands what the trains could do.


Although the United States has fallen behind Europe in the development of state-of-the-art rail technology, even 50-year-old technology could get the job done, according to Ash, who still has old passenger train timetables.

Train service in the 1950s allowed travelers to get from Green Bay to Milwaukee in a little over 2½ hours and from Green Bay to Chicago in about four hours, Ash said. That's not much slower than the same trip by car, but without the headaches of driving and finding a place to park.

With most of the freight trains now running by way of Duplainville, much of the onetime Air Line between North Milwaukee and Fond du Lac, which would require serious upgrading for passenger rail, could be operated as a 110 mph railroad. The Valley 400 used to take 1:15 to Fond du Lac and 2:20 to Milwaukee (yes, you can drive it a little faster than that, if you're willing to risk a speeding ticket) and 3:50 to Chicago (if you're driving, and you leave Milwaukee less than two hours before your appointment, the chances of you being late are nearly 100 percent).
Posted by Stephen Karlson at 23:20