WE JUST MISSED THE EXCITEMENT. There's nothing like a late March snowstorm to dampen the mood, particularly when it's the first snowfall for March. But this map, from this report, suggests it could have been much worse. 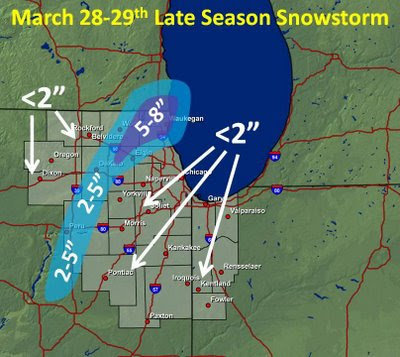 Most of the snow has since melted, although it hung around long enough on Sunday to require shovelling. A snow-thrower isn't a snow-cone machine, which is what that wet stuff resembles.

The report includes a number of photos from Northern Illinois University, taken to illustrate the snow, not the great aesthetics we offer in winter.
Posted by Stephen Karlson at 21:24