ANSWERING THE CHALLENGE. You're looking at a sixth-grade science project from the spring of 1965. 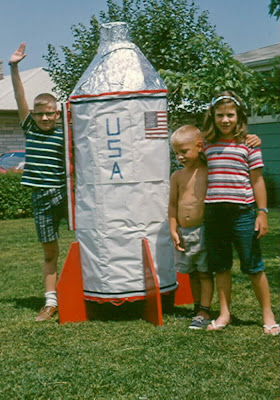 The Milwaukee Public Schools offered some of us a chance to take algebra in the eighth grade and physics as juniors in order to be able to take calculus (what we now know as Advanced Placement calculus) and organic chemistry and astronomy as seniors. I'm not sure how much of that is offered today, or if the students who would have been eligible are now in the wealthier suburbs, and if that means Milwaukee doesn't bother any more.

Jim Hu picks up a Pew Center report on public perceptions of science that suggests some deficiencies in knowledge (although a comparison with such a survey in 1965, when the accelerated program was by invitation only, isn't at hand) and some disagreements between practitioners and the public on matters of public policy. And yet another Pope Center report on the college bubble repeats the familiar gripes about what the collegians don't know.

One survey shows that college graduates are not as proficient in literacy as they used to be. Another finds that students only study about half as much as their professors think they should. Other reports show that good grades are easier to get than ever, with a B average or better now typical at most schools. If all students at a school always get good grades, a diploma from that school is no longer an indication of the student’s quality.

Thus, the value of a college education—as measured by students’ preparedness for the workplace—may be falling below what students are paying for it. Once this becomes known, colleges may be hard-pressed to fill classrooms. That could burst the bubble.

There's an opportunity for higher education to deflate the bubble itself: simply refuse to do the high schools job for them.
Posted by Stephen Karlson at 13:29