SHAMEFUL. The world has learned about the way some workers at Alsip's Burr Oak Cemetery supplemented their incomes.

"For many years, this was the only cemetery where African Americans could be buried," said Spencer Leak Sr., president of Leak and Sons Funeral Home, noting that Burr Oak once was owned by Ebony Magazine publisher John Johnson.

Dart said the scheme appears to have targeted older, unmarked graves that had not been visited in a long time. There was no indication the more famous sites were disturbed.

It's difficult enought for people with African ancestors, particularly descendants of slaves, to research their family histories, and the abuse of the older graves will make that work more difficult.

The Cemetery Care and Burial Trust Department, a division of the Illinois Comptroller's office, has said it has received complaints in recent years about poor upkeep at Burr Oak, including sunken or tilting gravestones, unmanageable roads, drainage problems and weeds.

Other accounts I have read mention that some of the older tombstones were also removed to make space for the off-the-books burials.

Tombstones are subject to the elements. 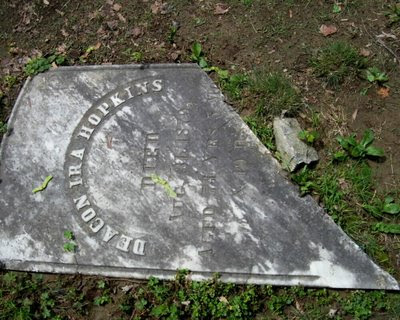 Ira Hopkins 1803-1879, Kelley Cemetery, Carmel, New York.
This stone honors my third-great-grandfather. I suspect it's a victim of the elements, as the stones for my third-great-grandmother, who he outlived, and his second wife, who outlived him, are still standing. The descendants of people buried in Burr Oak have been deprived of such evidence of their ancestors.

The proximity of cemetery plots can provide additional clues about family relationships. 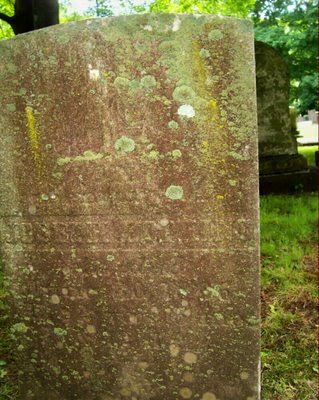 Joseph Hopkins 1783-1866, Kelley Cemetery, Carmel, New York.
My fourth-great-grandfather. The inscription is weather-worn but still legible. It's adjacent to Ira's.

The stones are useful also for determining whether ancestors served in the military. 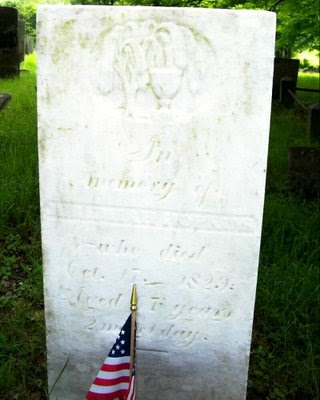 Major Jeremiah Hopkins 1762-1829, Gilead Cemetery, Carmel, New York.
Veterans' organizations often place flags on the graves of known service members. Descendants of the people whose graves were relocated at Burr Oak will not have that information.

Also, look closely at the tree-and-urn image on this stone, for my fifth-great-grandfather. The same image is on my fourth great-grandfather's well-worn stone. I don't know the significance of it, although its presence appears to be a family tradition. Where the stones are broken and discarded, researchers won't have those clues. Disgraceful.
Posted by Stephen Karlson at 16:05

Email ThisBlogThis!Share to TwitterShare to FacebookShare to Pinterest
Labels: decline and fall, history