STEAM TRAIN COMING. The Steam Festival in Owosso, Michigan, will have a Famous Visitor. 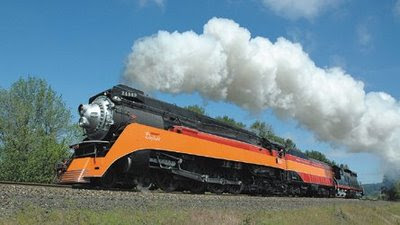 Unattributed Friends of the 4449 photo via the DeKalb Daily Chronicle.
Although the Southern Pacific is now a Union Pacific property, because 4449 is not part of Union Pacific's stable, it will not operate on the Overland Route. It will transit the Burlington on July 18.The train will leave Minneapolis at 8 a.m., is scheduled to be in Savanna at approximately 2 p.m. and will arrive in Union Station before nightfall. The special passenger excursion will be sharing the rail line with regular freight service, so delays are possible, according to a recent news release.
Posted by Stephen Karlson at 16:16