I've done some more soldering of sander assemblies, but they're not going on until the running gear is in good working order. The engine truck needs some work. There's no clearance between its rear wheels and the first drivers. That's relatively easy to put right with a drill and some 6-32 brass washers. The pivot for the trailing truck is also under construction. 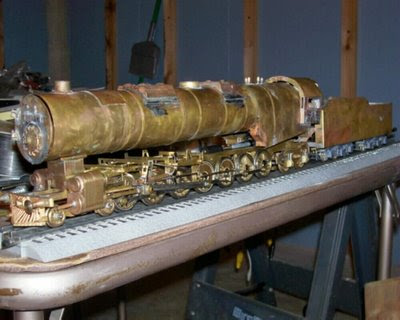 In the background are the furring strips that will ultimately support the benchwork.
Posted by Stephen Karlson at 23:55

Nice Model. I hope I can make something like that someday!

Thanks. It's not for sale, by the way. I'm hoping to demonstrate a test run on tracks later this year.

Scratch building is a skill you can develop over time.

Also, how long did it take you to build and where did you get the parts for it? Just curious

The late Jan Lorenzen of Locomotive Workshop offered this engine as a kit, that was about 15 years ago. To build one from scratch, it helps to be handy with a milling machine (getting the slots in the frame right) and if you can locate a source of 61" drivers, you're close enough to the prototype. There's not a lot of space for the engine truck, that's still an engineering challenge.

Ah. I also think we need more Model trains like the Andreyev 4-14-4. Know what I mean?

You're more likely to find models of the Pennsylvania duplex drives or Centipedes. A one-off Soviet prototype for which information is not easy to obtain, and which requires very broad curves, isn't likely to sell well. Every so often, though, a model of the more space-friendly Russian Decapod shows up.