EVERYTHING OLD IS NEW AGAIN. Boston's South Station, as built, had lots of tracks, including a lower level loop for more rapid turning of electric trains that never came. 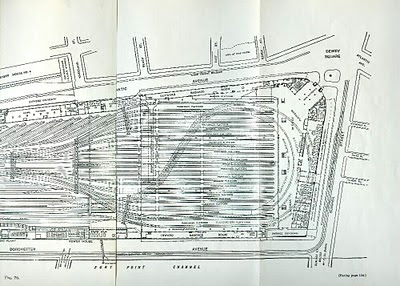 The track plan is from my copy of Passenger Terminals and Trains, which I am pleased to see is available in a new paperback edition from the University of Michigan.

The current station occupies approximately the upper third of the building, although the food court and the bus station occupy some of the Atlantic Avenue footage and some of the old freight house site. The tracks along the Fort Point Channel, and some of the concourse on that side (in Boston, they called it the midway) have been replaced by the Stone and Webster Building (or whatever successor corporation is there now) and a postal annex.

There aren't enough tracks in the remaining station for the expanding commuter service, and a resurgent Amtrak service (I'm still holding out for hourly Acela service the length of the Corridor.) Massachusetts wants to put some of the tracks back.

Boston Globe reporters Casey Ross and Noah Bierman wrote January 8 that instead of the private development project, “Massachusetts will try to buy the entire 16-acre US Postal Service mail-sorting facility near South Station in Boston, and use the property to significantly expand commuter rail service for the region.”

The railroad promoters of the late nineteenth century gave us the infrastructure to provide the freight and passenger service shippers and Passenger Rail authorities would like to offer today. Look for other transportation projects to restore trackage that was ripped up as an economy measure from 1960 to about 1980.
Posted by Stephen Karlson at 22:49