AN INFRASTRUCTURE BUILT FOR CAB-FORWARDS. The previous installment of the summer train report left off at Santa Clara and the O Scale National Convention. Some projects found their way home, either with me, or with a little help from UPS, and there might be some modelling pictures come winter. Time to head home. 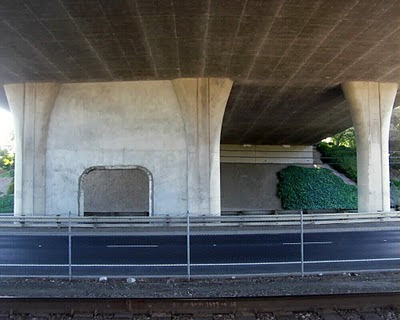 It's Saturday, but the train is comfortably full, and the Emeryville station is full of passengers, many for Six, some for points west, those for 724 All Aboard. 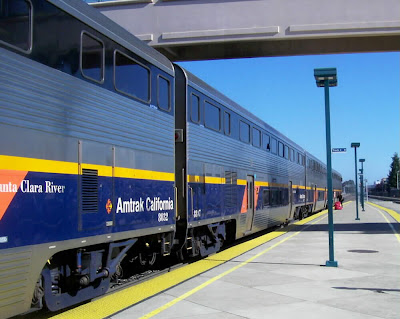 Here's Sacramento - San Jose Saturday train 727. I did well with sunny days in places like Portland and the Bay Area better known for their fog and rain. 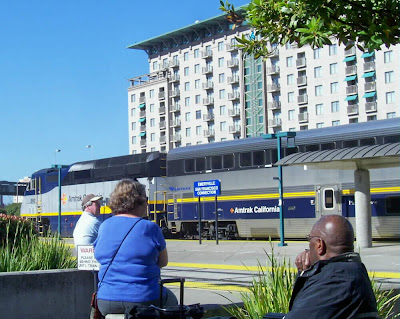 Advertising on the sides of cars isn't just for War Bonds campaigns anymore. 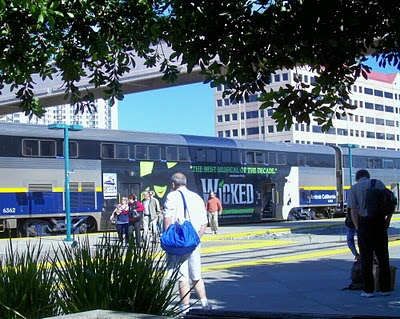 There's a coach yard west of the station. The station itself has enough space free of road crossings that Six can roll in and make a leisurely boarding, with sufficient time to get the consist and photograph the train in the act of loading. 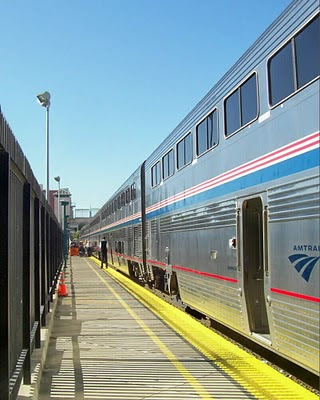 Before Southern Pacific built its bridge across the upper bay, it ferried trains from a terminal at Port Costa. One of the ferryboats burned at the terminal sometime after the bridge opened. Its remains have never been removed. 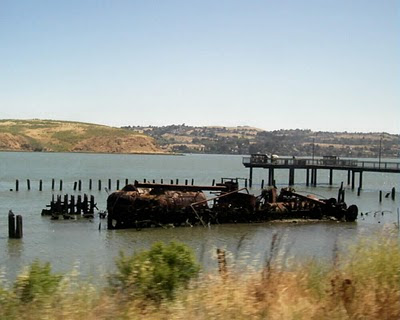 Martinez 10:23:07 - 10:28:52, one detraining passenger missed the stop, will ride to Davis. With more frequent service in the corridor, that mistake will not ruin his whole day. East of Sacramento, a missed train, or a late train, means a serious change of plans.
Six is on the other side of the split-grade track configuration east of the bridge. The mothball fleet is closer, and the eastbound track is higher than the autorack yard, offering a view of the ships. 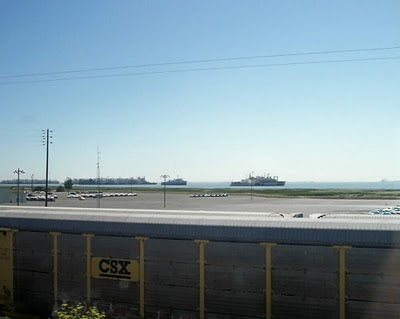 The sleeper attendant warns me not to go too far from the train. No worries, as there's a Starbucks in the old express building just the other side of the rapid transit. That's not a bad cross-platform connection to the rapid transit, either from the east end of the train, or from cars spotted closer to the station building. 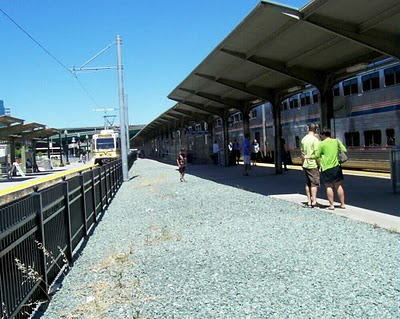 Leave Sacramento 11:48:58, time for lunch. The rapid transit line parallels the Southern Pacific on the north side, in full sun. The air conditioning is useful with outside temperatures in the low nineties. (It's a dry heat.) 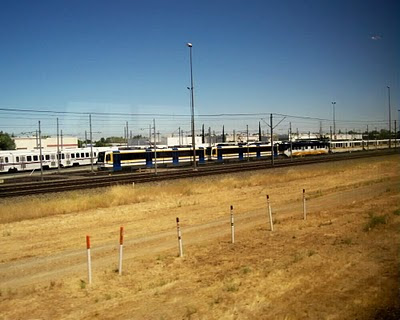 Roseville 12:12 - 12:16. The station and platform have been rebuilt, but much of the trackage laid for multiple sections of the Overland Limited and for adding eastbound helpers has been removed. 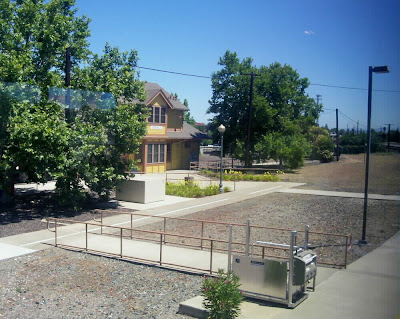 Colfax 1:16 - 1:17; Sightseer Lounge filling up for a good view of the Sierra crossing. There's a National Park Service guide aboard, but the sound system isn't working well. 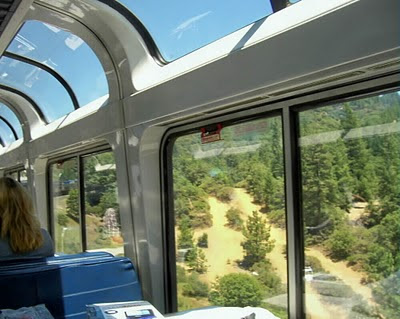 I've not been able to figure out from the maps and books I have what this abandoned snowshed is. It's on the western slope, but a considerable distance east of the summit, where there once was an enclosed turntable. 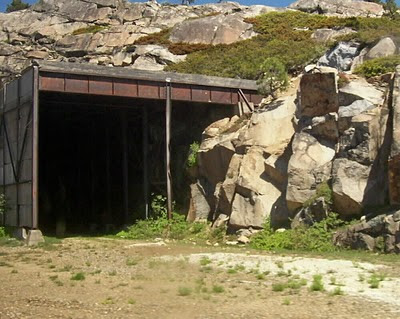 The concrete relay cases date to the era of General Railway Signal semaphores. Those are long gone, but the triple searchlight signals that replaced them still cycle from green through yellow to red as the train passes.

Outside temperatures are still high, but last winter's snowpack hasn't all melted. 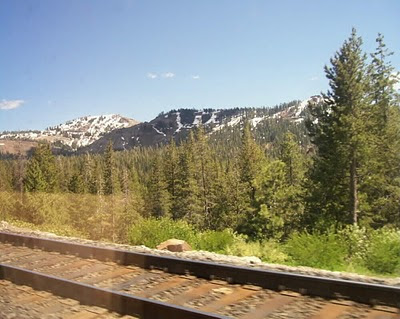 Pass Norden 3:06; Summit 3:14. The eastern slope follows the Truckee River to Reno. It's a pleasant Saturday and the fishermen and rafters are out. 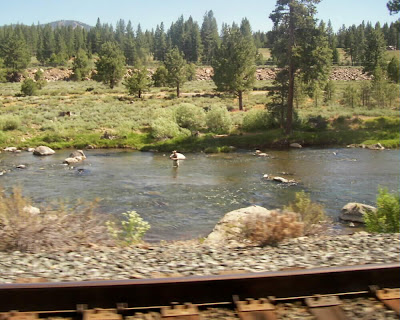 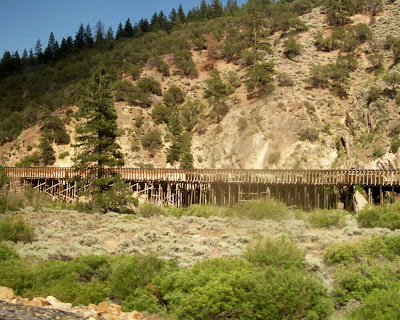 Truckee 3:36:42 - 3:39:38; enter Nevada at Verdi (pronounced vair-dye, nuh-va-duh) 4:20; arrive Reno 4:40:24. Union Pacific has entrenched through Reno, freeing up the road crossings the trains used to block. The crew change also takes place at Reno, no more hitting the slot machines in the waiting room at Sparks. 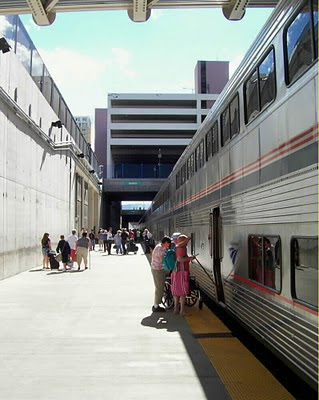 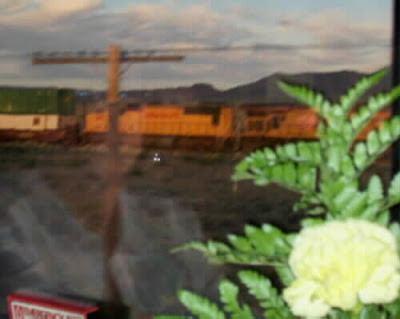