SO NEAR, AND YET SO FAR.  Several Mid-American teams received bids to the women's invitational tournament, and Toledo won it all in front of a full house at Toledo.

There's some carping out there about Toledo buying the victory (frequently, the host teams win in that tournament) and some snarking about Toledo making a relatively quick exit from the Mid-American tournament (at the hands of Eastern Michigan, another also-ran in the invitational tournament.)

Never mind all that.  There's work to be done in DeKalb. 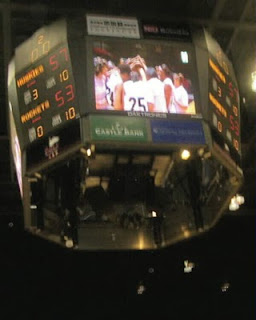 Senior Day, 26 February 2011.
Two years ago, it was Ball State excusing Tennessee from the first round of the national tournament.  That's the same Ball State that had a similar experience in DeKalb.
Posted by Stephen Karlson at 22:21