THE CASE FOR TRADITIONAL PASSENGER RAIL.  The latest proposal to speed up Midwestern passenger rail service to get sneered at is the Iowa line.  Wendell Cox offers his readers the grisly details.


The Federal government is again offering money it does not have to entice a state (Iowa) to spend money that it does not have on something it does not need. The state of Iowa is being asked to provide funds to match federal funding for a so-called "high speed rail" line from Chicago to Iowa City. The new rail line would simply duplicate service that is already available. Luxury intercity bus service is provided between Iowa City and Chicago twice daily. The luxury buses are equipped with plugs for laptop computers and with free wireless high-speed internet service. Perhaps most surprisingly, the luxury buses make the trip faster than the so-called high speed rail line, at 3:50 hours. The trains would take more than an hour longer (5:00 hours). No one would be able to get to Chicago quicker than now. Only in America does anyone call a train that averages 45 miles per hour "high speed rail."

The state would be required to provide $20 million in subsidies to buy trains and then more to operate the trains, making up the substantial difference between costs and passenger fares. This is despite a fare much higher than the bus fare, likely to be at least $50 (based upon current fares for similar distances). By contrast, the luxury bus service charges a fare of $18.00, and does not require a penny of taxpayer subsidy. Because the luxury bus is commercially viable (read "sustainable"), service can readily be added and funded by passengers. Adding rail service would require even more in subsidies from Iowa. The bus is also more environmentally friendly than the train.

Further, this funding would be just the first step of a faux-high speed rail plan that envisions new intercity trains from Chicago across Iowa to Omaha. In the long run, this could cost the state hundreds of millions, if not billions of dollars. Already, a similar line from St. Louis to Chicago has escalated in cost nearly 10 times, after adjustment for inflation, from under $400 million to $4 billion.

Michael Barone picked up the column, and the usual suspects are raising the usual objections.

Mr Barone's description of the bus service is incomplete.


It’s part of a larger trend for private companies to offer convenient and inexpensive bus service. A one-way ticket on the bus costs $18, compared to a likely train fare of more than $50. And the bus takes only three hours and 50 minutes to get from Iowa City to Chicago. That’s one hour and 10 minutes faster than the “high-speed” train.

So let’s get this straight. The progressive, modern, “win the future” high-speed rail, which would cost the taxpayers of Iowa millions, would be slower than existing bus service and would cost more. Why ever would Iowa want to spend one dime on this project?

That bus service is less than meets the eye.  It's a by subscription service, without public timetables, and the service is not as frequent or as cheap as Messrs Barone and Cox would have you believe.  I did a search for a weekday round trip from Chicago (the bus loads outside Union Station) to Iowa City and return.  Leave Chicago at five this afternoon, arrive Iowa City at the corner of Dubuque and Court Streets 8.50 pm, $28.  Return tomorrow afternoon, leave 7.10 pm, arrive at Union Station at 11 pm, $28.  No mention of intermediate stops for passengers or food or potty or smoke breaks.

But the critics of Passenger Rail are correct on one point.  Iowa can have a passenger train that's time competitive with the bus, and for less money than the national government and the states of Illinois and Iowa are paying to keep patching Interstate 80.  I give you Traditional Passenger Rail. 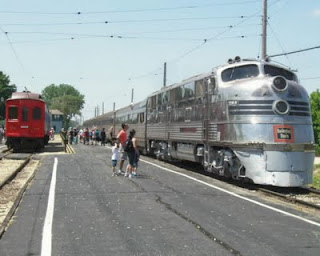 I took the picture at the Illinois Railway Museum on Memorial Day.  Inasmuch as the Iowa fast train is to start on the Burlington racetrack as far as Wyanet, where it gets on the Rock Island Line, and both railroads operated fixed-formation stainless steel train sets with Twelve Hundred Horsepower or Eighteen Hundred Horsepower locomotives, it serves.  Along the way, a train is capable of setting passengers down at Rock Island for the casinos, or stopping at Naperville to pick up Illinoisans for whom being a Hawkeye unaccountably dominates being a Huskie.  And that timing on the intercity bus?


The aforementioned Des Moines Rocket reached Iowa City in 4 hours 25 minutes on the timetable in effect in June of 1954, and the Rocky Mountain Rocket was there 3 hours 54 minutes after leaving Chicago.

Note: more than one train a day. The value of a corridor is in having multiple trains making intermediate stops (but not so many intermediate stops to destroy the speed advantage of the train over longer distances.)  It doesn't have to involve fancy electric trains or all the other European trappings the highway lobby's useful idiots masquerading as libertarians like to invoke.  Good old diesel locomotives geared for 117 mph with rakes of stainless steel coaches connected the Midwest with a passenger train network destroyed partly by the carriers' loss of interest in being railroads, and partly by public spending on interstate highways that are themselves wearing out.
Posted by Stephen Karlson at 12:32