TOO MUCH GOOD INFRASTRUCTURE.  One rationale for China's dedicated passenger lines is to free up capacity for freight trains in a country that moves most of its coal by truck, never mind the traffic jams, and the Mongolian Railroads considering a connection to the Russian network.

In the United States, with relatively little public subsidy, a coal railroad looks like this. 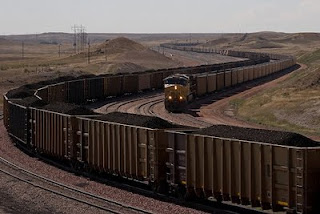 Kimon Berlin photo via Ecopolitology.
You're not looking at a Photoshop of The Pennsylvania Railroad's Allegheny crossing onto stock footage of the High Plains.  The Powder River Basin line is four main tracks in places, moving enough coal to give the environmental advocates fits.


This week [of March 2011], in the heart of one of the nation's best potential wind energy-producing regions, the Powder River Basin, the Obama administration handed away thousands of acres of federal land -- land owned by you and me -- to the coal industry.

Coal companies have been pushing to expand mining in the West, and they are no doubt uncorking champagne right now in celebration of this enormous gift. But for those of us who aren't coal executives, the giveaway comes at a high cost.

A Treehugger post lamenting the development of Western coal fields also shows that first-class rail infrastructure.  It's probably no consolation that one possible solution to the problem of transmitting electricity from the wind belt of the Empty Quarter to the power grids of the populated areas is to electrify the coal lines, thus reducing the railroads' use of diesel fuel to move the coal.  Everybody got that?
Posted by Stephen Karlson at 15:55