PUTTING THE CIRCUS ROUSTABOUTS TO SHAME.  Thursday was move-in day at the dorms, and by all accounts the student and university helpers performed magnificently.


Hundreds of student volunteers pitched in to help thousands of their peers – many of them freshmen – move into residence halls as part of NIU’s annual Move-In Day. Campus staff members – including NIU President John Peters – also lent a hand. Volunteers from Immanuel Lutheran Church on Russell Road handed out free bottles of water to anyone passing by the residences halls.

“We’ve had several compliments, especially from parents who have moved other children into other schools,” he said.

There's more stuff to schlep these days (I recall starting with a suitcase and a laundry bag) and more electric stuff to hook up. 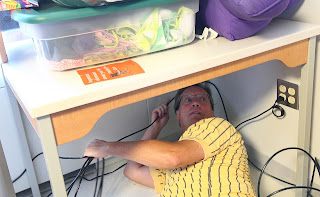 Daily Chronicle photograph by Kyle Bursaw.
I recall bringing only a clock radio.  It lasted about fifteen years.  Its successor has lasted about 25 years.  Universities have had to rewire their buildings to provide electricity for the computers, sound systems, and food preparation equipment our charges now see as socially necessary.

If the show is up and on the lot early, there's more time to play.


Getting students moved into the dorms quickly gives more time to get rooms in order before classes begin Monday, and it also allows students to enjoy the annual Huskie Bash on Thursday afternoon at the west side of Huskie Stadium. NIU departments and student organizations have scheduled meet-and-greet events all weekend for the incoming students.

Is the Hokey Pokey now part of orientation? 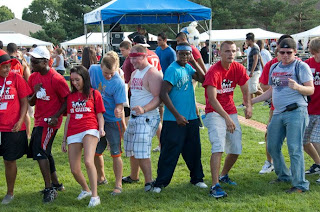