WORK IS WHAT WE DO BETWEEN MEETINGS.

That's Professor Munger's First Law of Time Allocation, and long-time readers will remember that its consequences include higher education being crowded out by activities either peripherally related to or in opposition to higher education.

The crowding out also fits into Roxie's World's Excellence Without Money movement. 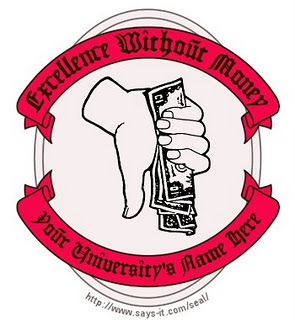 Crowding out can sometimes happen by administrative ukase.  Tenured Radical, now operating at The Chronicle of Higher Education, doesn't usually give job advice, but an inquiry by a professor at a university has keypunched all of the faculty schedules into a database called Meeting Maker, and unnamed REMFs have gotten into the habit of assuming that any time not specifically blocked off for classes is time available for meetings, and then peremptorily calling meetings on short notice.

Deeper into her advice is the root cause of Meeting Maker anxiety: part of Excellence Without Money is punishment of cooperative people for being cooperative.


Are those of us who are overworked so insecure that we need constant reassurance that we are wanted and needed? That is never clear to me, since my view of university work is essentially mercantilist.  In other words, there are finite amounts of work and responsibility in any given educational structure, and responsible people attract the most work.  In a mercantilist system of university work, virtue is not only its own dismal reward, one person’s virtue can also reward the non-virtuous person whose work systematically migrates off to others who actually do it.

The work is not finite, and the proportion of work that crowds out higher education is rising, but in the absence of clear lines of responsibility (and perhaps stiffer sanctions for abuse of tenure) there are opportunities to free-ride on the service work of others.


Take it from someone who just completed a successful run on the job market:  if you ever want to imagine working anywhere other than where you are now, no one wants to hire a senior person they have to carry around like a bag of beans.  They want to hire people who can not only wipe their own noses and shine their own shoes, they want colleagues who can do the kinds of institutional work senior people are supposed to do. They already have the other kind of colleague.

So here’s a suggestion:  you must not only stop taking on additional responsibilities, you need to consider going to a mentor or your chair to see if you can be taken off some of the committees you are currently on.  You would be surprised how generous people are in this regard.  And if your people are ungenerous?  Stop preparing for those committees in the meticulous ways you do, and miss some of the meetings.  It’s amazing how complex and time consuming “dental work” can be………

That approach might antagonize some of the more assiduous time-servers on committees.


And what kills me the most is the fact that committee work is the hardest to control and organize.  Your classes meet at certain times, and you block out things like writing time, office hours, class prep time, and so on.  But when your fellow committee members send you stuff to read and respond to hours before it’s due or hours before you’re going to meet about it (or you don’t see it until hours before because you were teaching all day and couldn’t check e-mail), what are you going to do except drop everything and respond, or be the asshole who doesn’t pull his weight?

Two reactions come to mind. One, the person who puts off sending the material until just before the meeting might be the Arschloch.  Two, if it got in that late, it might not be that important anyway.

Or, you could carry a copy of Atlas Shrugged to the meeting and if somebody takes you to task for not having caught all the typos on page 16 of the attachment, simply say "Who is John Galt?"  In the political monoculture of many universities, the shock value of that might be worth the time spent on the committee.
Posted by Stephen Karlson at 21:48