The French Turbotrains and the Electroliners that once served the Milwaukee-Chicago corridor were fixed-formation trains that offered food service ... a cafeteria car with some tables in the former, a full-service bar with sandwich service on the latter.

The Talgo trains a-building for the Hiawatha Service will continue the tradition.


The Talgo trains are being acquired under a joint purchasing agreement with the Oregon Department of Transportation. Each train is about 700 feet long and will include a bistro car that was not part of the original order. Some of the money saved by buying jointly with Oregon was used to pay for the bistro cars. Each train will also have wireless Internet service. The two trainsets will enter service in late 2012 with locomotives furnished by Amtrak.

In place of the cabbage car, one end of the Wisconsin trains will have what the British refer to as a Driving Van Trailer. 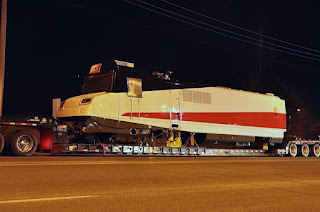 The bodies have some resemblance to the original diesels for the Spanish trains, which honored various shrines to Holy Mary, Mother of God.

A more secular incantation might be in order:  Swift of foot, our Hiawatha/Grant it free rein to 100/Render us late night departures/And extend to north and west our service.

I continue to have reservations about idiosyncratic-design, fixed-formation trains in a region made for fast running in prairie country and where the other upgraded routes are likely to get versions of the California cars for passenger accommodation.  The planners are beginning to catch on that a maintenance base far from the station is a bad idea.


Of the Milwaukee options, a site near 17th St., 1.2 miles west of the station, would offer almost 6 acres, with space for an 800-foot-long building and room for future expansion, transportation officials say in a comparison of the sites. That would be long enough for an entire train, including the locomotive, to stay inside while the coaches are being serviced, the comparison says.

By contrast, a site just west of the station would provide just 4.36 acres and a building there could be no more than 740 feet long, with little room for future growth, the comparison says. That means the locomotive would need to uncouple from the cars, and a cramped track layout would make it hard to maneuver, the department says.

Two sets of observations.  First, the Seventeenth Street site is east of the Shops, where there was a turntable to get a 4-4-2 or 4-6-4 properly pointed for its next train, and thus a shorter move for maintenance than the steam-era Milwaukee Road routinely made, while the site west of the station sounds like the vestigial coach yards built on approach tracks to the Everett Street Depot.  Second, a fixed-formation train means difficulty separating the power unit from the train, something the North Shore Line dealt with whenever an Electroliner required a traction motor change.  The return of a passenger train servicing base to Milwaukee, however, is an encouraging sign.
Posted by Stephen Karlson at 21:25