A screen-grab from the Illinois Railway Museum web-camera. 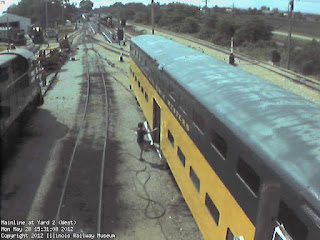 In the foreground: an air-conditioned Chicago and North Western Commuter Streamliner.  There's nothing quite like seeing one's work-a-day conveyance in a museum to make one feel old.  Approaching the station on One: the Nebraska Zephyr, also air-conditioned, and in good enough shape to make occasional sojourns onto the mainline railroads.  Waiting on Two is Leviathan, a replica Civil-War era American Standard.  There are several other replicas of Gilded Age locomotives in steam, and enough Super Power era steam locomotives in preservation that our restoration money goes into returning those to steam rather than building replicas of the ones that were lost, as the British are wont to do.

Posted by Stephen Karlson at 15:45