The next advance in miniaturization: mechanical mosquitoes. 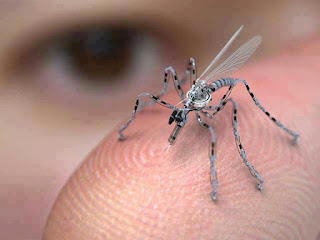 London's Daily Mail covers the story, including an intriguing possibility.


The insect manoeuvrability which allows flies the ability to land precisely and fly off again at speed may one day prove a crucial tactical advantage in wars and could even save lives in disasters.

The military would like to develop tiny robots that can fly inside caves and barricaded rooms to send back real-time intelligence about the people and weapons inside.

[Oxford zoologist Richard] Bomphrey said: 'Scary spider robots were featured in Michael Crichton's 1980s film Runaway - but our robots will be much more scaled down and look more like the quidditch ball in the Harry Potter films, because of its ability to hover and flutter.

'The problem for scientists at the moment is that aircrafts can't hover and helicopters can't go fast. And it is impossible to make them very small.

And here I thought Falling Skies was ripping off The Wrath of Khan's slug-in-the-ear trick. Now if some of our micro-drones turn up to battle the invaders' micro drones, or if praying mantises develop an appetite for mechanical drones ...
Posted by Stephen Karlson at 23:33