AFTER THE OIL BOOM.

In my report on an Amtrak detour ride in May, I suggested that Longview, Texas, merited mention as a destination for a train traveller, should that traveller have a more serious purpose than choosing a logical place to make a round trip without too much fretting about late trains and missing the return.  Longview is in northeast Texas, the connection for Shreveport, Louisiana (ah, for a connection to the Flying Crow at Texarkana) and at one time it was the commercial center for a major Texas oilfield. 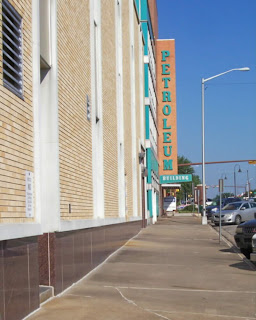 Yes, that's a large, empty office building called The Petroleum Building, and it's for lease.  Longview, however, is most assuredly not a ghost town, and a little walking around reveals some possibilities for the  visitor.  The train gets in before most of the businesses and museums open for the day.  There is, however, a sandwich shop and coffee house with some local art on the walls, aesthetically akin to our House Cafe, to provide sustenance and obtain some local knowledge. 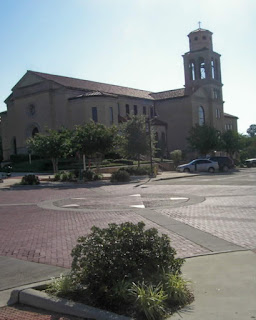 Several of the downtown streets have been prettied up with brick Lone Stars and decorative crosswalks. These intersections are controlled by traffic lights or stop signs, but wouldn't that star be a logical place to establish a rotary?

A class of fifth-graders was waiting to enter the Gregg County Historical Museum, and the staff allowed me to shadow them.  There's a cautionary tale here for municipalities that seek to save money by holding back the pay of public officials. 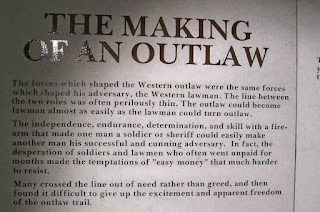 There's also some background on the reason the Texas Railroad Commission might have had to emerge as what the Organization of Petroleum Exporting Countries hoped to be. 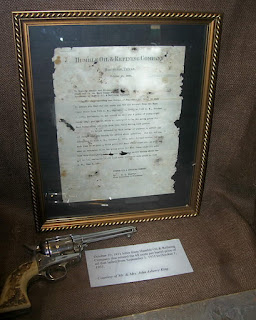 Nothing humble about this oil company.

Recruitment and student retention are not new problems for higher education, either, although the approach Kilgore Junior College took to expanding female enrollment and fostering male student engagement might have had unintended consequences. 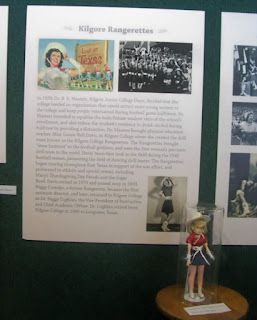 The Rangerettes might have been the prototype for the Dallas Cowboy Cheerleaders, or more generally for the production values of southern college football, and the effect of those production values on tailgatin' and boozin' might have been to increase, rather than decrease, both.  Kilgore itself is a community near Longview, which during the oil boom featured oil derricks on house and commercial lots through town.

The museum also had Ice Age and Indian lore material, and a staffer expert on these topics, who confirmed something I had heard here in the North, about Mississippian pyramid builders establishing a trade route delivering copper from what is now Michigan's Upper Peninsula to Mexico.

There's also a Museum of Fine Arts, which during my visit featured Charlie Brown's all-stars. 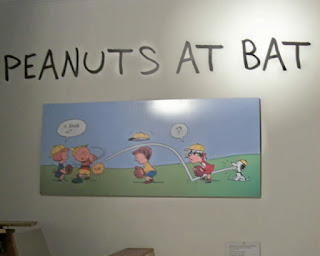 That's the first time Snoopy emerged as a shortstop, and possibly the explanation Lucy moved to right field. 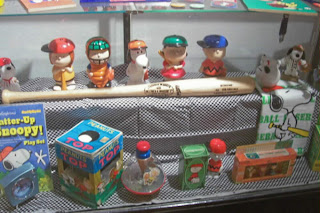 The downtown is walkable, although the train station is a respectable hike from downtown, and a number of the eateries observe the old tradition of closing between breakfast and lunch or lunch and supper, so do your scouting and plan your sightseeing accordingly.
Posted by Stephen Karlson at 15:37