WEIGH THE COSTS AND BENEFITS.


Richard Fry, a Pew senior economist and author of the report, says he hopes the report will provide perspective for families as they consider educational options.

"Given the fact that the job market has been especially weak for young adults, I think there's a conversation going on in a lot of American families with high school students about, 'Is college worth it?' " he says. "Student loan debt is sort of the lightning rod issue for this conversation."

Perhaps I'm more jaded than normal, after observing a big end-cap display of red plastic cups and five-packs of table-tennis balls on sale at a local supermarket.  As far as I know, there has not been an upsurge of interest in building analogue chain-reaction simulators.  I'll moderate my jadedness enough to note a student request, just for fun, to see the integral describing the evolution of a futures price with continuous storage costs, as part of today's classes.  I did emphasize that the story behind it was examinable, although the math was not.

But then I read about the amenities race going beyond the climbing walls and the nap pods, and out to the bars.


In an effort to appeal to increasingly demanding students, bars are cleaning up their sticky-as-caramel floors, installing midcentury modern furniture, and offering more hard liquor. This while struggling to keep prices low. “Students want to get drunker faster and cheaper,” said Jason Sidle, general manager of Rulloff’s Restaurant and Bar in [Ithaca, New York's] Collegetown. In its last decade, the Royal Palm Tavern sold about twice as much hard liquor as it had in the previous one, [retired Ithaca tavernkeeper Lenny] Leonardo said.

Mike McLaughlin, 21, a senior at Cornell, said, “I drink liquor because it takes too long to drink beer.” On the drinks menu at Rulloff’s, “Bitch Fuel” (vodka, gin, rum, peach schnapps and lemon-lime soda) is a popular recent addition, but Mr. Sidle has also required all his bartenders to download mixologist apps to their phones. “We get all these requests for weird drinks we’ve never heard of because they’ve seen someone drinking it on Facebook,” he said.

Put half that effort into evaluating integrals and you, too, dear student, can make option contracts and design Mars rockets.  Meanwhile, as the University of Wisconsin at Milwaukee enrolls more Wisconsin residents than the Madison campus, its attempts (or not) to raise its academic profile look increasingly like basketball and baby-sitting, as the beer-'n-circus model of the student life takes hold.


For decades, longtime residents and the commuter school got along well. But as the University of Wisconsin-Milwaukee grows into a robust residential campus, more students are spilling into nearby neighborhoods, especially at night.

Some of the neighbors aren't happy about that.

Students cut through residential streets and yards on the way to house parties and North Ave. bars. Some stumble home after a night of drinking and raise a ruckus while neighbors are trying to sleep.

It's the noisy, disrespectful drunks who give all students a bad name.

Just how many students fit that description is a subject of debate. Twenty-five of the university's 29,000 students were arrested Sept. 8, the first weekend after fall classes started, and 26 were arrested a week ago during police crackdowns on misbehavior.

Campus neighborhoods have changed a lot, and not for the better, says Capt. Stephen Basting, a Milwaukee Police Department captain who went to school at UWM and now serves in the police district that patrols the area.

At one time, Wisconsin-Milwaukee was where students took notes, took tests, and took off.  Taking off takes on a different meaning these days. 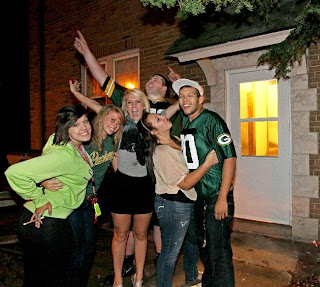 There's another university in Milwaukee, with perhaps a stronger athletic tradition.  (Hint: who is the Milwaukee Normal analogue of George Andrie?)  That university also maintains a modicum of community standards.


[Milwaukee alderman Nik] Kovac and many neighbors also would like to see a strengthened law allowing UWM to kick out students who continuously misbehave.

"If you screw up at Marquette, they kick you out," Kovac said. "At UWM, they say they are a public university and it takes heaven and earth not just to kick them out, but to discipline. That answer is getting old with the neighbors."

UWM Chancellor Michael Lovell said the law doesn't need to be stiffer. Chronic offenders already can be dealt with through existing measures, he said.

"I don't want to harm someone's life for one mistake," Lovell said. "The majority of students are good citizens. If they do get into trouble, we've invested a lot of resources to teach them.

"You treat people who are chronic offenders differently."

Wisconsin has a drinking culture that exposes young people to alcohol long before they go to college, and that's part of the problem, Lovell said.

"To me, the solution is not to show force," he said. "I want to educate students - show them what it takes to be a good citizen and a good neighbor."

It's not just the Wisconsin drinking culture. Somewhere between the government-guaranteed loans and the open enrollments, there's a misallocation of resources.
Posted by Stephen Karlson at 21:08